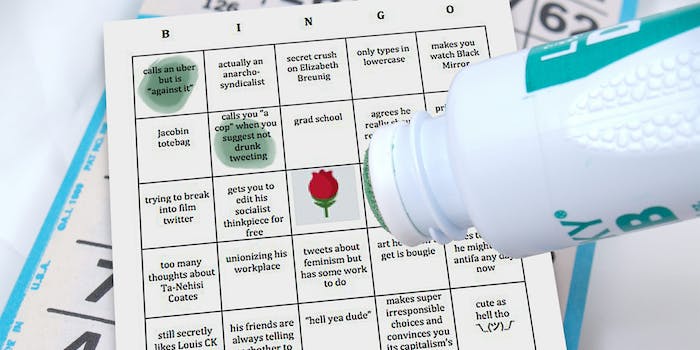 This meme's a winner.

The bingo card is a classic format for making fun of clichés and stereotypes. There’s a set of descriptions you can throw into a grid to be checked off, and you can bet it’ll be “bingo” every time. Although “[Insert Theme Here] Bingo” is a joke that goes back decades, it’s popular again thanks to very funny contemporary examples.

A few weeks ago, the Instagram account Jake’s Astrology created popular astrology bingo cards that roasted the 12 signs of the Zodiac. Katie Fitzpatrick also used the format in a “dating lefty dudes” bingo card that went viral over the weekend. With squares like “calls an Uber but is ‘against it'” and “makes you watch Black Mirror,” it really nails the zeitgeist of anti-capitalist bro Twitter. Apparently, there was a lot of demand for a sharp characterization like this, because it got 13,000 likes.

Fitzpatrick’s humor resonated, and spinoffs of her joke followed. Here’s the U.K. version of the “lefty men” meme:

Well-known lefty dude Will Menaker, one of the hosts of the Chapo Trap House podcast, made one called “dating me,” but it was entirely about the Amazon original series Bosch.

Others went for even more absurd angles:

looked up that bingo card that's going around and I'm not really sure I agree with some of these stereotypes pic.twitter.com/jZrlt7E9uM

It got to the point where people on DSA (Democratic Socialists of America) Twitter were joking about how far the bingo cards had gone:

Soon, the dating bingo theme had expanded to other kinds of bad people to date:

And other topics entirely:

Many people’s bingo cards were highly specific, including reference to themselves, their friends, and their podcasts:

people are doing this again so heres my bingo card pic.twitter.com/YRz5iKgHk6

Tom made a dating UK lefty women bingo card where the UK lefty woman is me pic.twitter.com/pCSjABNAaS

Thanks to @ThisIsJanic we also have a bingo card pic.twitter.com/HbsX7kjm7e

These bingo card memes are likely spreading because the format is versatile and, more importantly, recognizable. Even if you don’t know what any of this gobbledegook means, you are likely familiar with bingo cards. Bingo cards are seen at major events, conventions, and sports playoffs. The “meme” part is just the new trend of “dating” bingo cards, kicked off by Fitzpatrick’s very funny original content.

Although the subsequent jokes didn’t really live up to the original, and this wave of bingo jokes is already over, you can bet people will keep pulling the ol’ bingo card trope out of the hopper for years, maybe decades to come.