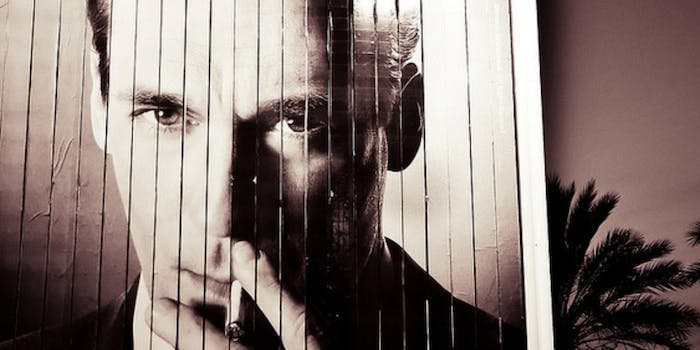 How the anti-hero is ruining television

The darkness within Don Draper has overtaken his character—to the point where it’s eclipsed everything else compelling about him.

Last Sunday was a big night for television, especially as it delivered the long-awaited death of the tyrannical King Joffrey on the HBO juggernaut, Game of Thrones. But over on AMC’s Mad Men, another tyrant struggled to maintain his dwindling power: Don Draper.

Although some have become fatigued with the frequently lauded AMC drama in the past few years, Mad Men remains a cultural fixture in the world of television, illustrated especially by a recent TIME cover story. While making it clear that he’s still generally interested in the show, Salon’s TV critic, Neil Drumming, recently wrote about what’s frustrated him during its recent seasons. And basically, it all boils down to Don.

“Drinking brown liquor on television looks cool,” Drumming writes, “as does smoking, wearing the hell out of a suit, and being devilishly adept at picking up women. But for me, Don could abandon any and all of these peripheral trappings if it means that Sally will not be traumatized any further. I think we all agree that the future well-being of the Draper children is the highest stake hanging on his potential redemption.”

However, Drumming’s issues with Don are less about his bad habits, or the effect that he’s had on his children, or even about whether he’s capable of being redeemed. Drumming’s main problem is that as Don has descended further and further into darkness, he has lost the essence of what made him who he was to begin with—his talent. Drumming goes on:

“But I have never doubted that he is, ultimately, where he should be. Don Draper is a guy who sells one group of people’s stuff to another group of people. By its nature, that could be an easily overlooked vocation. But the old Don Draper elevated it. In those initial episodes, before the show’s primacy was established, his somber yet dazzling presentations were what kept me riveted. Maybe right now, his soul is ugly. But in a pitch meeting, he used to be beautiful.”

Don’s darkness and his prowess as an advertising genius have always seemed to go hand in hand. His isolation from the rest of the world is what makes him a great convincer; when no one knows who you really are, you’re always pitching them on something. Let’s not forget that this is a character who proudly declared in the show’s first episode, “What you call love was invented by guys like me to sell nylons.”

But according to Drumming, the darkness within Don has overtaken his character—to the point where it’s eclipsed everything else compelling  about him.

And why is it that the darkness in most of cable TV’s male protagonists seems to always win out as of late? Just as it seems unlikely that Don will be able to excel at his job without a drink in his hand, it became increasingly clear over the run of Breaking Bad, and before that, of The Sopranos, that Walt and Tony wouldn’t get out of their crime empires and choose their families instead.

The obvious answer is that it’s more interesting to see a character fall than it is to see them get back up. Humans are incredibly flawed creatures, and television has been pretty hesitant to acknowledge this, until about a decade ago, that is.

In Difficult Men: Behind the Scenes of a Creative Revolution, author Brett Martin writes of the era’s protagonists, “These were characters whom, conventional wisdom had once insisted, Americans would never allow into their living rooms: unhappy, morally compromised, complicated, deeply human.”

But as of late, the abundance of these morally conflicted men has started to feel tired, rather than revolutionary. Before last year’s Breaking Bad finale, Vulture’s Margaret Lyons declared, “The Shield changed my life… I’ve never taken a show more seriously than I take Mad Men. And it’s been my experience that all television writers are legally required to leave offerings at the altar of The Sopranos,” but went on to say that, “…with the end of Breaking Bad, we’ve seen the quintessence of antiheroes come and go.”

It doesn’t help that all of these difficult men are, to the point, men. Also writing in anticipation of Breaking Bad’s finale, Jeff Jensen and Melissa Maerz of Entertainment Weekly observed:

“In this golden age of the antihero, we’ve rooted for mobsters, meth cooks, wife cheaters, serial killers, even a House majority whip. So why not a woman? Television has given us some deeply complicated female leads lately—Skyler on Breaking Bad, Carrie on Homeland, Cersei on Game of Thrones—but many of them fail the Bechdel Test, which evaluates gender equality in pop culture by checking if a story features (1) at least two women who (2) talk to each other about (3) something besides a man.”

Yet in the end, the real problem with TV antiheroes isn’t that there are too many of them, or even that not enough of them are women. The real problem is privilege.

America is defined by the idea that you can get everything you want, and still not be happy. Characters like Charles Foster Kane and Don Draper may have come from nothing, but they ended up with the world. The classic American narrative is one of success and power, even in the face of misery and hypocrisy. This is why we’re still fascinated with politicians and CEOs. It’s also why our television dramas are usually about those at the top of the food chain.

Serious subject matter demands stories about people in high places. Comedy is fine for the losers, but drama is for the important people, the decisions-makers, the masters of the universe. And ultimately, for the privileged.

There are exceptions to these rules, of course. The Bluth family and Jack Donaghy come to mind as comedic characters who were extremely privileged, although even in their respective upper-class worlds, they always felt like outsiders. But at the end of the day, the fact remains that rich white people still tend to be the most prominent characters in drama because as a country, we’re still the most focused on them.

Not that it will always be this way. Don Draper is a fascinating character, and he says a lot about America. But he doesn’t necessarily say more than any of the characters on Orange is the New Black.