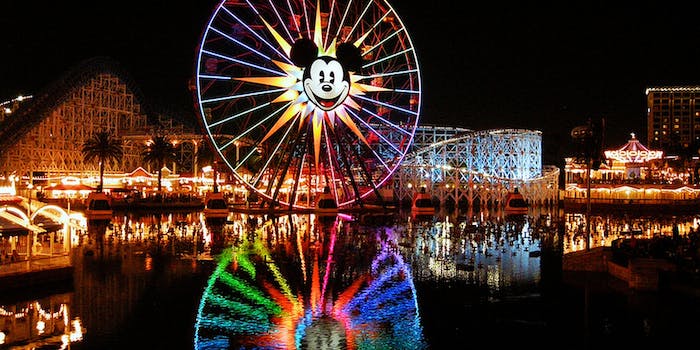 The darker side of your favorite Disneyland Instagram accounts

It's not all parades and dreams coming true.

I don’t know why I took this story. Writing about Disneyland Instagram accounts is not generally my beat. I’m the guy who covers idiots with their dicks stuck in tight plastic rings.

But here’s the thing: You can go anywhere on the Internet and find a listicle of five mildly amusing Disneyland Instagram accounts. They’ll be collected in gracious, optimistic contexts with adjectives like “amazing.” If I could do anything in this cold, content-swollen world, maybe I could foster a more demanding take on this particular brand of irrelevance.

I like the DILFsofDisneyland account because it’s a perfect example of the hilarious tightrope we walk as content curators. By my estimation, the DILFSofDisneyland Instagram has been written about around 2,000 times, mostly in publications who specialize in a light touch. Catch the DILFsofDisneyland on BuzzFeed! Bustle! The Huffington Post! Wherever non-confrontational content can be found!

But this is still an Instagram that basically posts creepshots of dudes walking around with their kids… right?

Look at that man. That man has no idea he’s being broadcasted to thousands of leering weirdos! His kid, too! Shouldn’t you ask someone’s permission before sending a photo of someone’s kid to 313,000 follo—DON’T RUIN THE JOKE, LUKE.

I’m not saying it should be a huge controversy, but it does make me laugh when I imagine what the reaction to a hypothetical MILFsofDisneyland account that specialized in candid photos of women walking around with their kids at Frontierland or whatever. People would lose their minds!

And trust me, this isn’t some Men’s Rights screed. Far from it. There’s such a huge catalog of gross, unwanted, public sexual attention thrown towards women on the Internet that a well-intentioned blip like DILFsofDisneyland doesn’t matter in the slightest. But it is interesting how we pass off something like DILFSofDisneyland completely uncritically. If you’re cool with people borderline stalking your family on vacation, then no problem.

Alright, I’ll be honest. This is a little blasé for my taste. Celebrity sightings at Disneyland is usually reserved for pure clickbait. However, I do need to give it up to this account for a picture of Matt Damon on the Matterhorn.

***SPOTTED!*** #MattDamon is at the park today! Photo via HuffingtonPost.com. #Disneyland #DisneylandCelebs

See, here’s the thing. I like this picture because it’s Matt Damon on the Matterhorn—but on a deeper level, I don’t know exactly why I’m wired to like a picture of Matt Damon on the Matterhorn. Matt Damon isn’t particularly unique in his celebrity, he’s just a guy who acts and wins trophies. It’s not like this is Slash dancing with Shamu or Billy Corgan looking nervous on Big Thunder Mountain. I mean, it’s just Matt Damon smiling and having a good time on the Matterhorn. That’s literally what all of us do when we ride the Matterhorn, yet here I am describing it as “incredible.” Are our lives boring enough that the faintest whiff of celebrity touching something we can relate to fills us with joy? Wait, don’t answer that question, I’m not sure if I’d like to face that truth right now.

All right, here goes the most ridiculous sentence I’ve ever published as a journalist. I have some ethical issues with the Manbunsofdisneyland Instagram account. Bear with me.

Manbunsofdisneyland is what you think it is: a series of photos of Appalachian-looking sub-hipsters rocking manbuns to go with their tank tops and chest hair. It’s the sort of thing that’s funny for about three seconds and gets forwarded along like a millennial chain letter.

I guess that’s fine. Content is king. I’m not trying to disparage someone uniting two bloggable elements (Disneyland, the concept of manbuns) into 62,000 Instagram followers. But here’s the thing: A TON OF THESE PHOTOS AREN’T FROM DISNEYLAND.

That isn’t at Disneyland! There are no places to surf at Disneyland! Your hyper-specific Instagram account is a huge lie. Apparently the person running this account reserves Monday for “non-Disneyland posts,” and that is total bullshit. OK, I need to stop talking about this now.

Last up, here’s an Instagram account I guarantee you don’t know about, mostly because it only has 79 followers and hasn’t been updated since 2013. I give you: DisneylandForAdults.

DisneylandForAdults sounds like it should be a very cool sex thing. It is not. It is just some guy who decided there needed to be an Instagram for grown-ups and still like going to Disneyland, which, by the way (and sorry), are we saying that’s not a weird? Like, if an adult said, “I’m going to Disneyland next week” you’d wouldn’t think, “HAHA YOU GIANT BABY”?

I digress. Here is a man pretending he has passed out from drinking at Disneyland in broad daylight.

Here is the same man showing off his Motel 6 bed and talking about how he’s trying to do Disneyland on the cheap.

Look. A Motel 6 is usually about as magical as stepping in dog doo on a morning walk. Bit if you’re doing #Disneyland on the cheap, #Motel6 Anaheim Maingate is a solid hotel at a great price. #disney #travel #disneylandforadults 👍

I love that this guy thought “you know what? I bet I could get a little thing going if I start posting Disneyland photos for adults!”

Godspeed. We await your return.