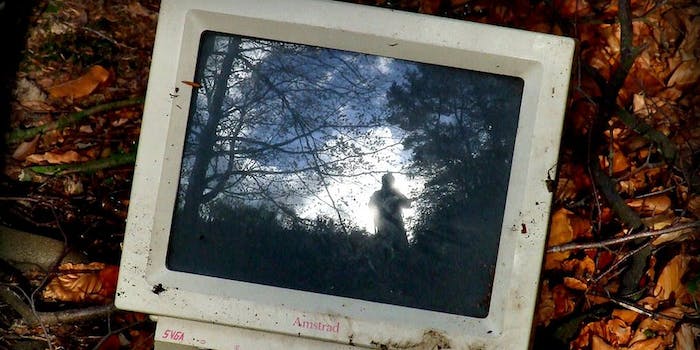 Jezebel has come into the spotlight recently for calling out its own employer online. According to a staff editorial published on Monday, Gawker Media has stood by and done nothing while Jezebel’s pages are overloaded with violent pornographic GIFs and images. Several other women’s sites are supporting Jezebel’s fight against pornographic Internet trolling. Maybe they’ve seen it on their own websites, maybe they haven’t, but that doesn’t mean they can’t relate.

In 2000, when I was 14 years old, I volunteered at the public library. They had just opened the brand-new computer lab and needed help keeping an eye on it. This was before the average home had a computer, a laptop and least one smartphone. In fact, you were asked to attend a one-hour class before accessing the computers, because most people didn’t know how to use them.

One day, my supervisor came in before I opened the lab and sat me down. I could tell something was wrong. She looked very uncomfortable, shifting about in her small wooden chair. She told me that some man had been coming into the lab, sitting at a computer for about an hour and then heading out, leaving at least 20 to 30 hardcore pornography pop-ups on the computer.

She didn’t know who he was. He typically came during the afternoon rush and would sneak out quietly. She didn’t even know how the man was accessing pornography, because there were supposed to be blocks on the computers.They were trying to find out his identity and ban him from the library. But in the meantime, she basically had to warn me that if I ever saw a computer with something “unclean” on it, I should shut it off immediately without trying to close the pop-up windows one by one.

I don’t think I ever told my mom about this. I grew up pretty sheltered, mostly by personal choice. I didn’t really know what men looked like naked until I was almost 20 years old. I feared that if I told my parents about what my library supervisor told me, they would want me to quit the volunteer job I loved so much. Besides, I’d been working there for a few months and never had any problems.

But then, one day I was closing up shop by myself, and there they were.

I looked away in an instant and forcibly shut down the computer, but that moment was all it took for me to see some pretty disgusting things. I felt sick inside. I thought about all the people who sat in the lab during my shift, knowing that one of them was him. He had come up to the sign-in sheet at my desk, maybe even looked at me or talked to me, then sat down and proceeded to look up disgusting pornography with every intention of me seeing it.

It took me a long time to be comfortable with my own sexuality, and I know for a fact that this experience contributed to that. Instead of being exposed to sex in a healthy way, on my own terms, I was punched in the face with deprived acts I would never agree to, even as a sexually healthy adult.

We might think anonymous comments of pornographic GIFs on Jezebel are a distant problem and not something to get worked up about. It’s just trolling, right? Except it’s not. I’ve lived it. It doesn’t matter how anonymous the commenter is or whether they’re targeting someone specific. Each one of those comments on Jezebel is an active decision to damage the writer or reader emotionally. It’s not about turning someone on; it’s about taking power away from those who are expressing their opinions on their own terms.

Do I agree with everything Jezebel writes and stands for? Not in the least. I’ve found the publication takes some situations out of proportion without stepping back and looking at the overall context. I don’t even agree with the title of their recent editorial. I would not call what’s happening to them “rape” by any means. It’s aggressive sexual harassment, but it is not rape. Calling it rape is disrespectful to those who’ve been through that traumatic experience, at least in my eyes.

But, that doesn’t mean they don’t have the right to say how they feel in a space they’ve created for themselves and their readers. And if they do express that opinion, no matter how maligned it might be, that’s no excuse to barrage them with sexually explicit material without their consent. It’s not funny, clever or even free speech. It’s sexual harassment.

Gawker needs to address this issue as soon as possible. How they do that is up to them. It could be through keeping track and possibly banning certain IP addresses, or requiring a Facebook login to leave a comment. But ignoring or stalling the issue is disrespectful to every person in their workforce, as well as their readership.

I can’t speak for #YesAllWomen when it comes to street harassment, workplace discrimination, humiliation while breastfeeding or other issues that have come to light recently. But, in the case of Internet pornography trolling, I can say #YesThisWoman, because I have lived it. And every time someone presses the “send” button for one of those pornographic comments on Jezebel, it’s like I’m the 14-year-old computer lab supervisor again, sitting by as some man scars me for years without ever seeing his face.