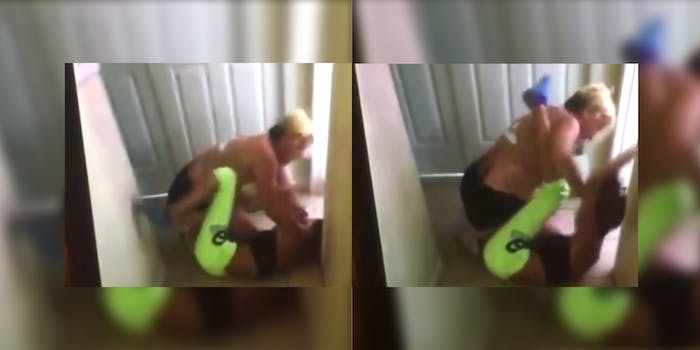 ‘Cash Me Ousside’ teen beaten by mother in leaked video

A new video posted by WorldStarHipHop shows the “Cash me ousside, how bow dah?” meme teen Danielle Peskowitz Bregoli being verbally and physically abused by her mother, Barbara Ann Bregoli.

In the video, which was taken of a video on another a smartphone screen, Barbara Ann says to Danielle, “Give me the phone, bitch,” while holding onto her hair, then proceeds to drag the 13-year-old along the ground and attempts to hit her while pinning her down and saying, “You’re so fucking tough?” Danielle is seen hitting her mother back.

Another clip shown in the same video shows Barbara Ann yelling at Danielle while Danielle sits on a couch and talks on a phone. The people recording the video from the phone screen laugh in the background after both clips.

Elite Daily speculates that the footage is connected to a call that police received on March 7 for assistance at the family’s home in Boynton Beach, Florida. According to TMZ, Barbara Ann was allegedly kicking out a friend of Danielle’s who was living at their home. Police told TMZ that the call didn’t escalate physically, however, and they left without further incident.

Danielle became a meme sensation in January after an October appearance on the Dr. Phil Show went viral with her threatening catch phase, “Cash me ousside, how bow dah?”

This behavior isn’t an anomaly for the family. During her first interview with the show, Danielle admitted to her mother attempting to hit her, and footage from the interview showed Barbara Ann swearing at her, and the duo threatening to hit each other as well.

Representation for Danielle did not immediately return Daily Dot’s request for comment.

Update March 22, 3:56pm: Danielle told the Daily Dot in a statement that the video was from two years ago, and that an ex-best friend has released the video in an attempt to extort money from her in exchange for keeping other videos unreleased. In a follow-up email, Danielle said the family is discussing possible legal recourse.

“I love my mother,” Danielle told the Daily Dot via email. “Video was from years ago. We weren’t really fighting, just arguing. Video was edited to only show that part by my ex-best friend who is trying to get me to pay her money to not release old videos.”