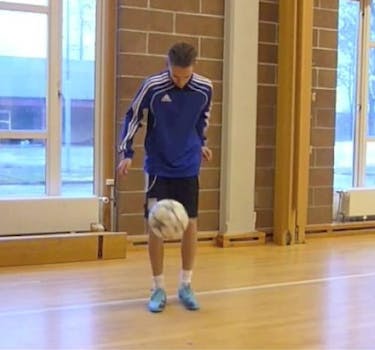 Norwegian Daniel Nilsen, 16, was overjoyed when Cristiano Ronaldo RT'd his soccer-skills video. But that wasn't all ...

A young Norwegian soccer player was overjoyed when his hero retweeted a video of him showing off his skills, but that wasn’t all that awaited Daniel Nilsen in his Twitter interactions with Cristiano Ronaldo.

Real Madrid star Ronaldo was wondering how to celebrate reaching 15 million Twitter followers when Nilsen sent him the link. Ronaldo shared the clip with his legions of followers, calling it a “great video.”

The well-edited video shows just how much of an influence Ronaldo’s fancy footwork has had on Nilsen, 16.

Ronaldo later encouraged followers to send in ideas for what they’d like to see on his Twitter account in 2013, with the promise that the most-retweeted comment would win some swag. Most of the replies simply praised the 27-year-old star, and Nilsen was among the contenders, tweeting dozens of messages at Ronaldo. “I know that you HATE to lose, even against your girlfriend!!” Nilsen wrote.

It scooped the top prize: a follow from Ronaldo and tickets to a Real Madrid game in Spain next month.

“It’s been an AMAZING day,” Nilsen tweeted. “I’ve been followed by Ronaldo and won two tickets! My dream became true :-)”

Nilsen told adressa.no that he used to watch clips of Ronaldo on YouTube and wants to become a professional player. The tweets from Ronaldo give him “extra motivation” to reach that goal, he said. If his video’s anything to go by, he’s well on his way.