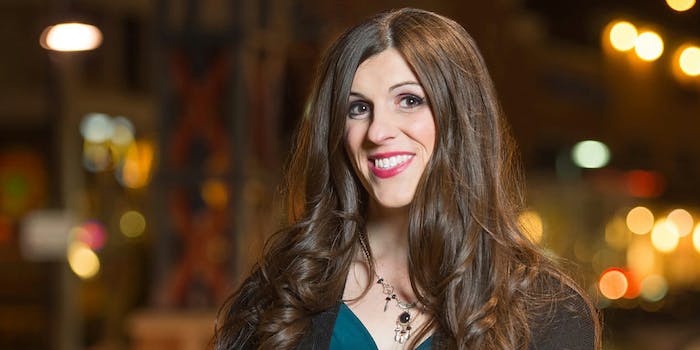 Photo via Danica Roem for Delegate/Facebook

Even Christian leaders chimed in with a big nope.

Tuesday, Virginia made history, electing an out transgender woman to the state Senate. Danica Roem is Virginia’s first out trans representative, and one of two out trans women elected to office (an out trans man, Tyler Titus, was also elected in a Pennsylvania school board race) in Democrats’ sweeping victories last night.

Though the occasion was a momentous one, not everyone was happy to welcome a trans person into the state legislature.

Andrew T. Walker—who is neither from Virgina nor Minneapolis (where the other out-trans woman Democrat, Andrea Jenkins, was elected)—is the director of policy studies for the Ethics & Religious Liberty Commission of the Southern Baptist Convention, where he is tasked with “equipping Christians … to address ethical issues facing society.”

Recently, the commission made news after the massacre at a Baptist church in Sutherland Springs by saying that there isn’t “a gun control policy outlined in scripture.”

People were in no way pleased with Walker’s tweet, the implication of it that children had to be “prepped” for trans people representing American citizens, as though they were different from everyone else. Many let him know right away that his assertion was ridiculous.

Some responded to Walker with grace.

I'm not yet a parent (only a couple weeks now!), but I'm overjoyed that @CortneyHD and I will be raising our child in this "new world" where he or she will be accepted & loved, no matter his/her sexual orientation or gender identity.

But most responded with spreading love and understanding.

Christian parent here. We're celebrating. We're preparing our son to embrace difference, not fear or discriminate against it. https://t.co/1dricxi1oR

I’m a Christian Parent, and I’m just fine with it, and will teach my kids that they should be just fine with it as well, as it’s not our place to judge. It’s our job to love god, love people. And transgender elected officials are people.

I’m no Christian but some of our text is shared scripture. So I’d begin by teaching my children to love thy neighbor as thyself. You should probably start there. In every situation. With every person.

Christian leaders from across the globe chimed in to talk about inclusion.

As a Christian theologian, I’m listening to my transgender colleagues, working for LGTBQ rights across the board, and celebrating inclusion and transformation in churches. And I’m telling everyone I can the world is better when our elected officials better represent LGTBQ justice https://t.co/WG50I96pks

Good question. Here's a possible answer: everyone, no matter who they are or what they look like, is a beloved child of God, with infinite dignity and beauty, and should be reverenced as a beautiful creation. https://t.co/nCHX0bmZpe

Some reminded him of one famous Christian and his positions.

The consensus: This isn’t a “new world” children need to be prepped for. This is the world, as it’s always been, and all this does is help prove what a wonderful world this is.

Yep, that last tweet is from an Episcopal priest.