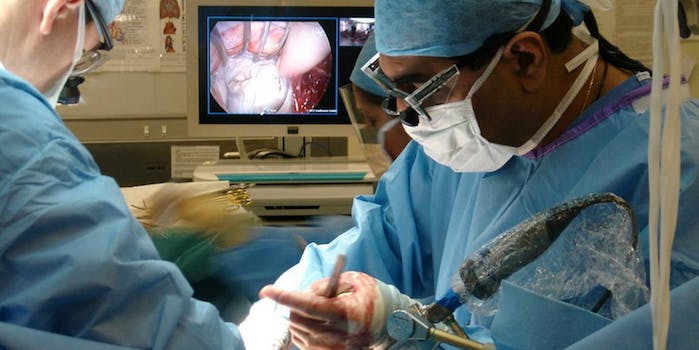 Should doctors be allowed to use iPads in the operating room?

By now, most motorists are well aware of the inherent dangers of texting while driving. But in hospital operating rooms, it’s not clear if doctors and surgeons recognize the same danger.

There is a growing trend in the medical community of patients accusing doctors of malpractice for so-called “distracted doctoring.” And a slew of medical industry studies show that cell phone and computer use during surgery is startlingly common.

In the Pacific Standard, Rebecca Buckwal Ter-Poza relays the story of a Mary Roseann Milne, a 61-year-old Texas woman who underwent a low-risk cardiac procedure in 2011. Despite the relative safety of the operation, Milne died on the operating table. Her family, which is now suing for malpractice, blames the anesthesiologist, who they say was busy using his iPad instead of monitoring the woman’s vital signs.

In his deposition, the anesthesiologist, Dr. Christopher Spillers, testified that he didn’t even notice Milne’s critically low blood-oxygen level until “15 or 20 minutes” after she “turned blue.”

Spillers went on to admit that he does in fact text, search the Web and read ebooks during procedures.

But five minutes can be a fatally long time to go between checking blood pressure and oxygen during surgery. The brain begins to die after about four minutes without oxygen.

Spiller’s case also isn’t helped by the revelation that he not only posted on Facebook during surgery but that he has even posted about patients. In one instance he wrote, “After enduring the shittiest Friday I’ve had in a while, I just found out my next patient has lice. Freaking lice.” In his deposition, Spillers admitted that making such postings were poor decisions.

The malpractice case is ongoing.

One or two stories like this might be shocking, but certainly not enough to make the case that iPads and cellphones in the O.R. are dangerously common distractions. However, Spillers is not alone. Medical industry surveys show that use of such devices occurs with astonishing frequency, even though most practitioners are aware of the risks involved.

At a meeting of the American Society of Anesthesiologists in 2011, one of the speakers presented survey data showing that “nurse anesthetists and residents were distracted by something other than patient care in 54 percent of cases—even when they knew they were being watched.” And lest you think they were being distracted by other work-related tasks, that same survey showed that most of the distractions were “pleasure cruises on the Internet.”

A similar survey published in a journal for perfusionists, the medical technicians who run bypass machines during cardiac procedures, discovered that 56 percent of professionals in their field admitted to cell phone use during surgery. This, even though 78 percent of survey respondents said that cell phone used posed a risk to patients. So while a majority of these technicians believe cellphone use to be unsafe, it appears a majority of them do it anyway.

Computers and cellphones in the O.R. have been defended by doctors and hospitals who say the devices are important for communication and record keeping. But Ter-Poza shoots down this defense, noting that SMS messaging is not secure enough to meet federal standards for doctor-patient confidentiality. And as the aforementioned surveys and lawsuits suggest, often the devices are being used to pass the time instead of work.

The urge to surf the Web during long, monotonous hours at work is one felt by many workers. And in most cases indulging it can be harmless. But as Dr. Runjhun Misra wrote in an article for the University of Connecticut, when doctors let themselves get distracted it’s arguably a violation of their ethical code.

“When physicians take the Hippocratic Oath at the beginning of their training, they are sworn to always do good and never knowingly do harm to a patient,” Misra writes. “To adhere to that oath, it is critical to be mentally present during all clinical encounters or you may miss a critical, life-impacting piece of information.”