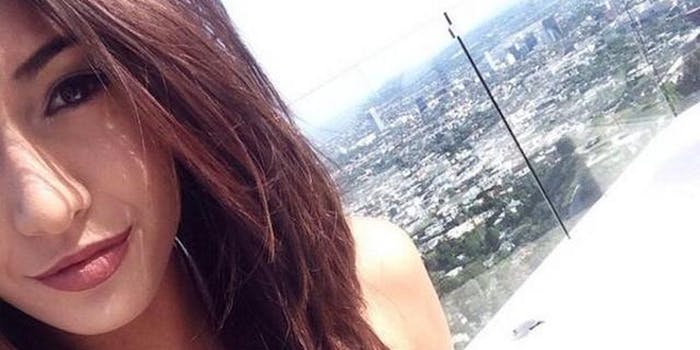 Here’s a glimpse into the thrilling life of a multimillionaire gambler with terrible aim.

Multimillionaire gambler Dan Bilzerian lives a high-stakes life. He’s handsome and muscular, rich enough to party with a sea lion, and the license plate on one of his Italian supercars says “SUCK IT.” He has the world at his fingertips.

In the movies, these things always look so fun, but this particular stunt didn’t go so well for Griffith. According to TMZ, Bilzerian and Griffith were doing a Hustler shoot at a Hollywood mansion on Wednesday when Bilzerian tossed her into a pool from way up high. But she didn’t quite make it, and ended up breaking her foot, likely missing a paying gig.

I was looking forward to shooting for @SexAndSub SO bad today, stupid broken foot.

More than anything I’m still bummed I had to cancel shooting for @kinkdotcom yesterday.

I just want to get back to work… that’s my only concern. Anyone trying to book a gal with a broken foot?

This was of course caught on video. You don’t really see Griffith hit the edge of the pool, but you hear it.

Here’s a glimpse into the thrilling life of an Instagram playboy king with terrible aim:

Griffith told us via email, “I had to cancel a shoot for a site that I had been looking forward to shooting for for weeks, and loved before I had even entered the industry.”

A rep for Bilzerian wrote, “Sorry, but we’re not commenting.”

“Your body is flawless, you must work out all the time!” pic.twitter.com/S6WLQX7qAQ