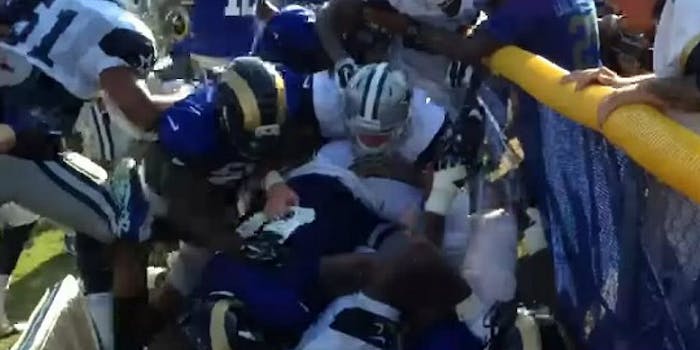 Fights at football practice, while not rare, are hardly ever this nasty.

Fights at football practice occur all the time, enough so that they’re not usually a newsworthy event.

But when a joint practice between two NFL teams explodes so badly that the nastiness of the fisticuffs lifts off like a rocket of hate into the stratosphere and when said practice has to be stopped because of how hot the blood is boiling, that’s when it’s appropriate for you to pay attention.

Already during the 2015 NFL training camp season, we’ve seen the Redskins and Texans fight among themselves, but the brawl Tuesday between the Cowboys and the Rams is on a different level because of the intensity and because of how close the fighting players were situated to the fans.

Take a look to fulfill your bloodthirsty needs.

Usually, football fights are stupid and pointless, because guys are throwing punches at other guys wearing helmets. There’s obviously a much greater chance for the punch thrower to hurt his hand than it is for the punch receiver to feel anything at all. The key, then, is to find some unwitting soul who’s not wearing a helmet and then try to hit him in the face.

After the fight, Rams coach Jeff Fisher decided he wanted to end practice. Oh, and in case you want to compare Tuesday’s brouhaha to the Redskins-Texans disagreement from earlier this month …

As for what it all means …

OXNARD, Cal.-Heck of a couple of brawls at Ram-Cowboy practices. Meaning of them? There is none. Great on video, but no impact whatsoever.