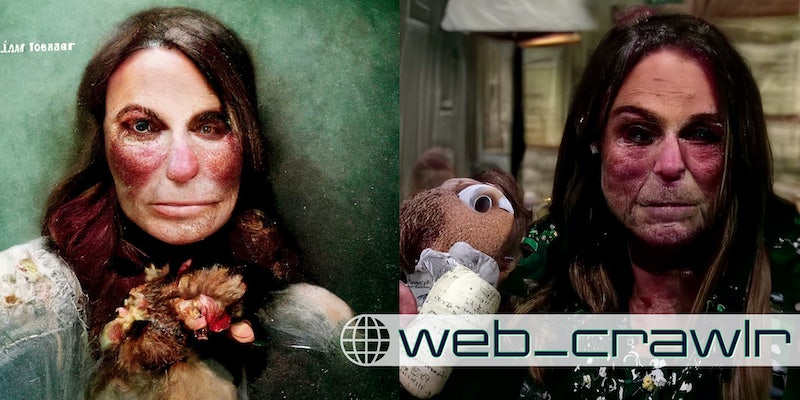 Newsletter: This ‘Loab’ meme is haunting the internet

Happy Friday! We crawled the web for you and our top stories today include: how Facebook engineers admitted they don’t where all of its user data is, a deep dive on the “Loab” meme that’s haunting your timeline, a look at an editing mistake in House of the Dragon, and the return of the Daily Dot’s Behind The Seams video series that examines a different element of movie costume design.

After that, our Culture Editor Tiffany has her “This Week On The Internet” column breaking down the biggest discourse, and she shares with you her pick for meme of the week.

That’s quite a bit. See you tomorrow!

Two engineers said there isn’t a “single person that exists” who knows where all its user data is.

Loab is ‘an emergent island in the latent space.’ It’s also a meme

It’s not a creepypasta, but it has become a copypasta. It’s “Loab,” the name for an AI-generated image of an unsettling woman with red cheeks that was revealed on Tuesday. Now, she’s a meme.

The show didn’t edit a shot meant to be edited through visual effects.

The Daily Dot’s Behind The Seams video series is back! This time, our Culture Reporter Gavia looks at the complicated history of Starfleet’s minidress uniform in Star Trek.

Hack your age with artificial intelligence

Are you really as old as you think you are? Discover your mind’s and body’s aging process with the Humanity app. Through advanced AI algorithms, the app calculates your rate of aging and helps you identify actions you can take to improve your healthspan. Join over 100,000 Humanity users already learning how to optimize daily habits for a healthier and longer life.

🗣️ This Week On The Internet

In each edition of web_crawlr we have exclusive original content every day. On Fridays our Senior Culture Editor Tiffany Kelly recaps the most pressing online discourse of the week in her “This Week On The Internet” column.  If you want to read columns like this before everyone else, subscribe to web_crawlr to get your daily scoop of internet culture delivered straight to you inbox.

🌯 Remember the $3 Chipotle burrito hack? Well, a Chipotle employee is going viral for sabotaging a customer’s order after they tried it. “Don’t try that $3 burrito hack at MY chipotle,” the worker wrote as a text overlay on his video.

💸 Asking your boss for a raise can be hard, especially when they tell you “no” and then brag about telling you no in a work meeting. One TikToker says this is exactly what happened to her.

🥤 A “hungover” McDonald’s customer ordered a Diet Coke to help “cure” her hangover, but was surprised to get a can and cup of ice instead of a drink from the fountain machine.

✨ Put the *you* in euphoria this Virgo season. Want to check out your horoscope? Take a look at our monthly “Dot Rising” column.

🍴 A woman says servers at a Baxters American Grille ignored her because she was dining alone at the restaurant.

🗣️ Chris Clemmons, the popular YouTuber, is going viral for raising awareness about the disregard people have for service workers.

📅 Meme of the Week

OK, we have to circle back to the Don’t Worry Darling premiere memes because they were very good. This one shows Nathan Fielder talking about doing a rehearsal of the event.