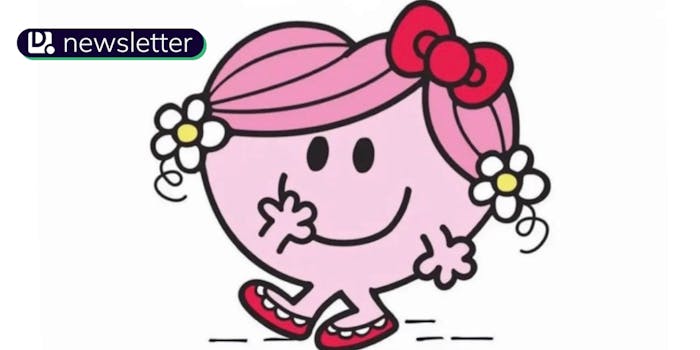 It’s the middle of the week and we’ve got some key reports to help you get through it. Our top stories include calls to boycott Hulu, a look at how the “Little Miss” memes are already dead, and an exclusive on how an anti-vaccine dating website left users’ personal data exposed online.

Plus, our Senior Culture Reporter Audra breaks down the plague of “ending explained” videos on YouTube in her weekly “Now Streaming” column.

Let’s get into the news. See you tomorrow!

HULU BOYCOTT: People online are calling for a boycott of Hulu after a report detailed how it rejected Democratic campaign ads about abortion, climate change, and gun control. Criticism against the streaming platform spread on TikTok and Twitter, where #BoycottHulu was trending. You can read more about the criticism here.

MEMES: You’ve probably seen the “Little Miss” memes, which riff on designs from decades-old children’s books, on your timeline recently—but as our Culture Reporter Michelle notes, between brands and conservatives taking the meme over, it’s already dead. Read more about the quick death of the “Little Miss” meme here.

TECH: Kyle Jenner criticized Instagram recently, claiming the popular app was copying TikTok. That sentiment grew enough that on Tuesday Instagram responded to the backlash by saying it understands the criticisms… but will continue to make changes.

EXCLUSIVE: Our Tech Reporter Mikael has an exclusive report on how an anti-vaccine dating website left its users’ personal data exposed online. The site, Unjected, launched last year and claimed to be the “largest unvaccinated platform” on the internet and has been referred to as the “Tinder for anti-vaxxers.” Some issues were fixed after a security researcher discovered numerous vulnerabilities.

‘Nope’ and the plague of ‘ending explained’ videos

Should the fact that Logan Paul didn’t understand Nope keep you from watching it? On the contrary—view it as a recommendation.

But his tedious tweet thread highlights the plague of the YouTube-fueled “ending explained” genre.

The ending of Nope, Jordan’s Peele’s excellent third film, which debuted on Friday, doesn’t need an explanation. It’s very straightforward, more so than his previous films, Us and Get Out.

A search for “Nope ending explained” on YouTube brings up dozens of videos breaking down the ending, or other parts of the film. One filmgoer claimed he saw the person in front of him Google “ending explained” during the end credits. (And no, Nope doesn’t have an end-credits scene, a plague brought to us by Marvel.)

Peele is a very nuanced filmmaker, and he likes to stash away symbols and references. But the way we watch TV and movies is different now. We weren’t really Googling “ending explained” videos a decade ago and definitely weren’t scrolling TikTok while watching TV.

But now there are multiple streaming platforms and so much weekly content to keep up with, which pushed the relevance of the ending-explained industry. Stuff that really doesn’t need to be explained is overanalyzed, every last “Easter egg” revealed. Because what we stream often doesn’t have our full attention, we outsource it.

And that can be helpful, but this reductive approach—the “everything wrong with” YouTube genre or belief that every movie needs to be “solved” or explained—isn’t doing great things for discourse or media literacy.

Nope is about the danger of spectacle, from the jump. There’s at least one devastating scene that really spells it out. (Which also has its own “explained” videos.) The ultimate irony of Logan Paul’s tweet is, he certainly knows about using spectacle for personal gain.

Managing your money can be tough. But it doesn’t have to be. With Truebill, you can effortlessly track your spending, find and cancel unwanted subscriptions, lower your bills, and grow your savings. Join over 2 million members who are already walking the path to financial freedom with Truebill.

🏋️‍♀️ A woman filmed a man intensely staring at her through a window for 20 minutes while she worked out at a gym.

🥚 This McDonald’s order got messed up in one of the strangest ways possible.

🤣 Is life bumming you out right now? Make tonight a movie night and watch these feel-good movies that will lift your spirits and make you laugh. *

🚗 A Starbucks worker claims a customer asked him to push her car for her though the drive-thru and didn’t even get out to help or thank him.

📻 This TikTok showing how a man listens to Target employees’ conversations on a Motorola radio is going viral.

🍴 Awkward. A woman went viral on TikTok after claiming that she got an unwelcome surprise on a recent trip to Texas Roadhouse: her ex was the server.

⛽ A Mobil gas station worker criticized management in a viral video by putting up a sign on the door that read: “I have COVID, but management says its ok to work.”

🥝 Whether you’re into wired or wireless, prioritize sound or comfort, we’ve looked at some of the best headsets for streamers. If you want more stories like this, subscribe to the Passionfruit newsletter.

A former music industry worker went viral on TikTok after pointing out similarities in different songs, especially how today’s songs are very similar to songs from the past. On example was Lizzo’s new song “2 Be Loved” being similar to Lady Gaga’s “Perfect Illusion” from 2016.