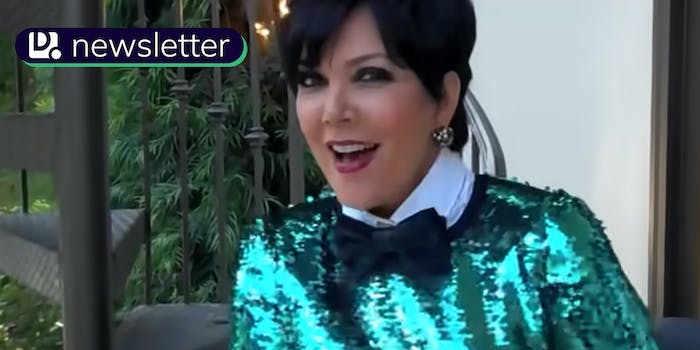 Newsletter: Have you been ‘Krissed?’

Happy Friday! Doing anything fun this weekend? I’m seeing some friends and also going to a Mets game. ⚾

Today’s top stories look at a new viral prank on TikTok, another QAnon endorsing candidate winning an election, and a viral Pride protest at a university in Seattle.

After that, our Culture Editor Tiffany Kelly explains the “Feral Girl Summer” discourse in her weekly “This Week On The Internet” column.

That’s a lot to get through, so enough from me. Let’s dive into the news.

TIKTOK: Have you been Krissed? The term refers to a video of Kris Jenner dancing to “Lady Marmalade” that has quickly become a viral prank on TikTok similar to the Rick Roll. The hashtag #krissed has more than 167 million views, and the audio has been used in more than 20,000 TikToks. Our Senior Culture Reporter Audra breaks it all down here.

CONSPIRACY: Republican Marya Flores came out victorious in a Texas special election earlier this week, gaining control of a seat in the House of Representatives long held by Democrats. Flores has previously used hashtags related to the QAnon conspiracy theory. She will join several other members of Congress, like Rep. Marjorie Taylor Greene (R-Ga.), who have endorsed the conspiracy theory in one way or another.

PRIDE PROTEST: Students at a Seattle university are posting a smash-cut montage of graduates handing Pride flags to the school’s president to protest a recent decision to maintain a policy that prohibits the employment of individuals in same-sex marriages. The now-viral TikTok has garnered over 2.9 million views. You can read more about the protest here.

TikTokers are trying to push for a ‘Feral Girl Summer’

Three years ago, Megan Thee Stallion introduced the world to the concept of Hot Girl Summer. The rapper referred to herself as “thee hot girl” in the lyrics for a song and in the marketing for the mixtape Fever.

Memes around the term exploded before Megan Thee Stallion released a song of the same name with Nicki Minaj and Ty Dolla Sign in August of 2019. Since then, the term “Hot Girl Summer” has been co-opted and altered by others. Now, TikTokers are trying to make “Feral Girl Summer” a thing—and they’re getting backlash for it.

But first, what is Feral Girl Summer? The term feral is usually used in reference to a wild animal, but online, the term has been applied more broadly.

“I’m about to go feral” is a phrase seen a lot in fandom communities, especially in response to an interview or new photos from a popular actor. Feral is seen as a positive word now—it paints a picture of acting as wild as you want. And there’s where Feral Girl Summer comes in.

TikTokers are using the phrase to embrace not looked polished, and that includes not wearing matching clothing, not shaving, and not doing hair and makeup to go out. Others are using it to promote “straight up psychopath” and messy behavior. TikToker @__mull, who is the self-identified originator of the term, posted a video in March in which she says, “I can just feel it. It is time for Feral Girl Summer.”

Why is there backlash?

The term became a source of Twitter discourse over the last week when BBC posted a link to a radio program that explained its rise.

The guests on the show said that Feral Girl Summer was about “anti-perfectionism” and “rejecting beauty norms,” along with the image of someone who is going out heavily.

But Megan Thee Stallion never claimed that you needed to look perfect in order to have a Hot Girl Summer.

“So it’s just basically about women and men just being unapologetically them, just having a good-ass time, hyping up your friends, doing you, not giving a damn about what nobody gotta say about it,” she told the Root in a 2019 video.

It sounds not unlike what people say Feral Girl Summer is about—which is being criticized for reworking a term created by a Black woman.

“Feral girl summer sounds like it involves going a very long amount of time without bathing,” another Twitter user wrote.

But you don’t have to worry about a large group of people deciding not to shower for the whole summer because of a TikTok trend (something that is hard to think of doing if you live in a place that is currently experiencing a heat wave). For now, it appears Feral Girl Summer is mostly a concept that people enjoy discussing online rather actually living it.

Enjoy your summer in sustainable beachwear

Bermies swimwear is for those who love the ocean so much that they want to keep it clean by rocking some stylish, sustainable swimwear made from recycled plastic bottles. You can even make it a family affair and shop the Matching collection for you, your significant other, and the kids. Get 10% off with the code Summer_10 when you shop Bermies today!

📱 A TikToker sparked a ton of attention after she surreptitiously filmed her co-worker asking her to hang out after work—and not letting up once she explained she didn’t want to.

🔋 In a viral video, an employee shows a brand of electrolyte popsicles in the freezer of his workplace, claiming that all jobs that have these “work the sh*t out of” its employees.

🎙️ A video has gone viral of a man using the Walmart intercom to try to get assistance while buying a laptop after being unable to find an employee in the store.

🛍️ It’s dangerous to shop alone. Let Dot Recs guide you to the deals on the best products and services worth your money. *

🛒 A woman went viral on TikTok this week after making the confusing claim that she was being stereotyped for shoplifting while waiting in line to check out.

😮 One TikToker went viral after explaining how a laser hair removal tool left her with first-degree burns.

Warner Bros. released a photo of Ryan Gosling as Ken in the upcoming Barbie film, and the internet went wild. Several memes reference Gosling’s other roles.

Now Playing: 🎶“Nothing Compares 2 U” by Prince🎶