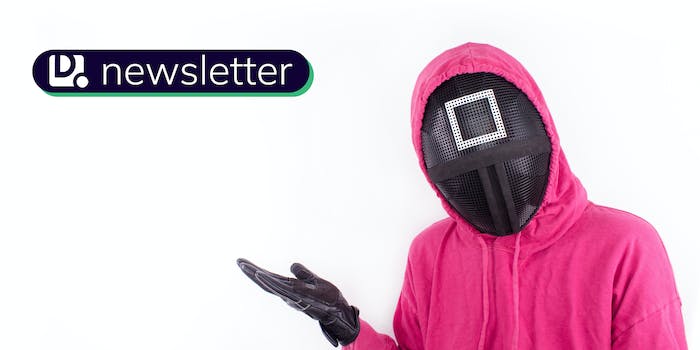 Newsletter: Would you sign up for a ‘Squid Game’ game show?

Today’s top stories include backlash to a real-life Squid Game game show, a deep dive into TikTok’s emotional investment into an eel pit, and a recap of the latest Obi-Wan Kenobi episode. Plus, we’ve got our Politics Reporter Claire looking into the social media history of Sen. Josh Hawley in her weekly “Dirty Delete” column.

WTF?: Despite the glaring political themes of Squid Game, the popular Netflix show, decision-makers at the streaming company seemed to think it would be a good idea to launch a real-life game show based on the series. Predictably, the decision is already facing a considerable amount of criticism from people online.

EEL PIT:  People online have become emotionally invested in a TikToker’s eel pit project, and we spoke to the creator who has become the latest obsession of the internet. He told the Daily Dot he’s “very surprised” by all the attention. Check out our full interview with the creator here.

STAR WARS: The Obi-Wan Kenobi series on Disney+ is nearing its end, and our Culture Reporter Gavia recapped the latest episode. In the penultimate episode of the miniseries there are “twists and betrayals abound.” You can check out Gavia’s recap (which does contain spoilers from episode 5) here.

For Josh Hawley, it’s all about the show

Sen. Josh Hawley (R-Mo.) is a creature of the swamp. The freshman senator from Missouri got involved in politics working for a Washington, D.C. based advocacy firm a decade ago. His interest in politics extends much further back, possibly all the way to high school.

Hawley is a capital ‘C’ conservative whose history of hard-right politics includes yammering about antifascists, saying abortion is “religion” for leftists, and a stint working for an organization the Southern Poverty Law Center deems an “anti-LGBTQ hate group.”

In 2014, Hawley launched the Missouri Liberty Project to fight the Environmental Protection Agency and Affordable Care Act, and allow corporations to force their religious views on employees.

Its now-defunct website described Hobby Lobby’s ultimately successful lawsuit challenging the requirement that it provide contraception as “one of the most important religious liberty cases in decades.”

Thanks in part to his work, today your employer’s health insurance might not cover birth control. Hawley’s first ever tweet promoted Dick Bott interviewing him about the case.

Hawley likes to blast liars, but he’s no stranger to spin.

Days before the Capitol riot, a small group protested outside his Virginia residence, using a bullhorn and chanting. Hawley, the first senator to say he’d object to certifying the 2020 presidential election, described it “leftwing violence” by “antifa scumbags.”

According to PolitiFact, “Police reports conflict with Hawley’s account.”

See, with Hawley, it’s all about the show. He’s the kind of guy who crusades against tech companies, whines about conservative censorship online, then pays those same companies to advertise his book, The Tyranny of Big Tech.

Hawley might profess to hate ‘em, but he is a big tech purist when it comes to his social media footprint. He’s on Twitter, Facebook, Instagram, YouTube, and possibly Telegram. He doesn’t appear to have profiles on any of the fringe platforms popular with the hate groups and conspiracy theorists that comprise a core part of his base.

Interestingly, Hawley is happy to kiss the ring of former President Donald Trump, but that fealty isn’t strong enough to entice him to join Truth Social. Though in fairness, he might be one of the millions of Android users who can’t download it yet.

The Hawley he projects doesn’t have quite the courage of convictions of the man himself.

Take his feelings on the “swamp.”

Though he writes sneering posts about it, Hawley has no problem getting his hands in the muck.

Rather than drain said swamp, he wants to move it home closer to home. In 2019, he celebrated the United States Department of Agriculture opening an office in Missouri. “Now let’s move the rest of the Dept of Agriculture and nine more departments out of the swamp!” he tweeted.

It’s almost like Hawley doesn’t hate big government so much as he wants to bring it home.

Get your groove on this summer

Vint & York glasses are a celebration of self-expression through fashion and art. These frames reimagine decades-worth of the ‘vintage feel’ to create playful, timeless fashion statements. From daring and vibrant colors to 60’s inspired cat-eye styles, there’s no better way to indulge in modern nostalgia than with a pair of Vint & York frames. Find the perfect look with this quiz and save 10%!

☎️ A call center worker recorded herself going through a Starbucks drive-thru while working from home, sparking a debate among workers on TikTok.

⚖️ A matchmaker‘s videos about the time she was sued by a client who used a racial slur during a date with one of her clients has gone viral.

💳 A user on TikTok went viral this week after allegedly discovering a “card skimming” device on a card machine at 7-Eleven.

🍯 The recent arrests of 31 members of the white supremacist group Patriot Front have only fueled far-right accusations that the group is a “honeypot” run by feds.

🏪 We’ve all been there. You buy a snack and it is essentially half full. Well, a TikToker has gone viral for answering why that is the case.

🏳️‍⚧️ We’re spilling the tea on chest binding, and where you can find the best options for trans men, nonbinary, and genderfluid people.*

A viral video of a drunk “Karen” berating her boyfriend has elicited sympathy from many people online.

Now Playing: 🎶“Bulls on Parade” by Rage Against The Machine🎶