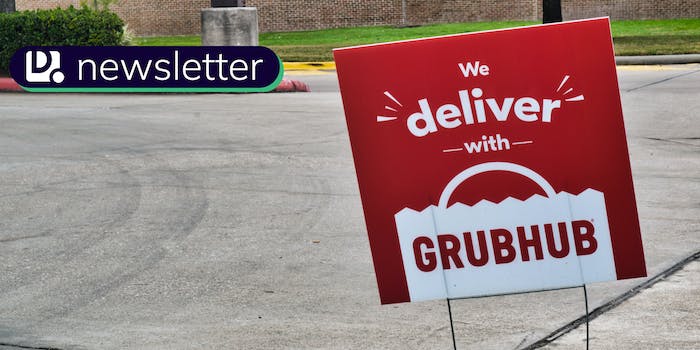 Today’s top stories include reports about a Grubhub fail, a hacking group claiming it commandeered surveillance robots in Russia, and a Republican congressional candidate having a Streisand Effect moment.

Plus, our Politics Reporter Claire dives into the social media history of a Florida Republican in her weekly “Dirty Delete” column.

Let’s get into the news.

HACKING: A hacker group claims to have compromised a robotics company that sells wheeled surveillance robots to countries, including Russia. Mikael, our tech reporter, dives into how the hacker group uploaded screenshots of an allegedly compromised web portal used to control the robots at an airport near Moscow. Check out the full report here.

FRYING PAN: A North Carolina congressional candidate is going viral for claiming that she “never ran anyone over” or “hit them in the head with a frying pan.” The tweets, which received relatively little attention until she won her primary this week. Now she’s being mocked for drawing attention to the very things she denied in an example of the Streisand effect.

WHOOPS: A Grubhub “free lunch” promo that offered a $15 off code for a few hours caused the popular app to crash. The promo was hyped a lot, but when users tried to use the code, the app crashed. “So much marketing and hype, just to fumble out of the gate” is how one person online described the debacle.

The furthest-right candidate in Florida

Florida state House Rep. Anthony Sabatini (R) would run to the right of a stop sign. Not even the Florida legislature is conservative enough for Sabatini, who’s hoping to parlay his extremism into a seat in Congress.

The Florida lawmaker is running on a far-right paint-by-numbers platform that includes re-litigating the 2020 presidential election with “full forensic audits” (which aren’t a thing, but never mind), less immigration, more guns, and no transgender females in women’s sports.

He proudly touts endorsements from some of the most notorious political figures in the nation: Reps. Matt Gaetz (R-Fla.), Madison Cawthorn (R-N.C.), and Marjorie Taylor Greene (R-Ga.) have all lined up behind him, as has QAnon hero Mike Flynn.

Sabatini has profiles on pretty much every platform: Facebook, Twitter, Gab, Gettr, Parler, Truth Social and an unverified Telegram that appears to be him. The only place you won’t find him is YouTube—his campaign website links to a channel that’s been suspended for violating its terms of service.

Sabatini’s social media history includes sharing his opinion that Black Lives Matter is a “hate group” and a “cult” whose leaders should be imprisoned, defending Capitol rioters, calling Disney World “pedo world,” and yammering on and on and on about the Capitol police—which he openly detests and has called the “gestapo.” (So much for Republicans backing the blue, eh?)

Sabatini loves Florida Gov. Ron DeSantis (R). He’s also a huge fan of former President Donald Trump and dearly hopes he will run again in 2024. He’s not sure who Trump should pick as a running mate, however. He’s separately suggested that Trump “must” choose Tucker Carlson and Supreme Court Justice Clarence Thomas.

Someone should probably tell Sabatini the United States only has one Vice President.

He’s not so keen on Republicans who dare speak the truth or step across the hard-right line. He recently attacked the dozens of Republican Senators who voted to provide Ukraine with aid to defend itself against Russia.

Moves like these have earned Sabatini increasingly open rebukes from Republicans. Florida Politics reports that his Sunshine State compatriots have nicknamed him “Absentini” for skipping so many legislative sessions to campaign out of state.

But don’t worry about him. Even if making enemies in his own party comes back to bite him, as it recently did Cawthorn, Sabatini will be just fine—for eggs, steak, toast, and hashbrowns scattered, smothered, covered, and chunked is a salve that even takes “the sting off a stolen election.”

Might not be a bad idea to hold his primary watch party at a Waffle House.

How to catch a catfisher

As if dating isn’t hard enough, now there are “Tinder Swindlers” and other catfish scammers to be on the lookout for. Meet the catfisher’s kryptonite: Social Catfish. This social media investigation service has the advanced tools to help you verify the person you’re talking is who they say they are. Unmask a catfisher with Social Catfish today!

🧁 Domino’s lava cakes are at the center of this viral video, which shows that the company is now giving out three cakes instead of the usual two. The online consensus is clear: the world loves lava cakes.

💵 A TikTok couponer has gone viral after posting a video showing a messy Dollar General store, which she attributes to the story only having a single worker.

📺 Netflix is no longer the king of streaming content, but who is coming to take its place? These are the best streaming services you should ditch Netflix for.*

🍵 Yikes. A TikToker says their partner unknowingly “poisoned” them with elderflower tea that was prepared improperly.

💰 An intense discussion was sparked online after one user posted a video showing what a Walmart in a seemingly wealthy neighborhood looked like.

🥝 Artist Ilse Valfré shares her brand’s journey from Tumblr to the blockchain. If you want to read more stories like this, sign up for Passionfruit, the Daily Dot’s weekly creator economy newsletter.

📱 A woman on TikTok shared a series of videos detailing how her date told her to either walk home or go back to his place.

📹 Footage from a Ring security camera showing a white child banging on his Black neighbor’s door with a whip has gone viral on TikTok, receiving more than 15 million views.

Viral TikTok footage shows a Dunkin worker crying during a stressful shift, sparking a discussion among viewers about working conditions and what led to this scenario. “When you get three call outs and two people quit in one day,” the video’s on-screen text says.