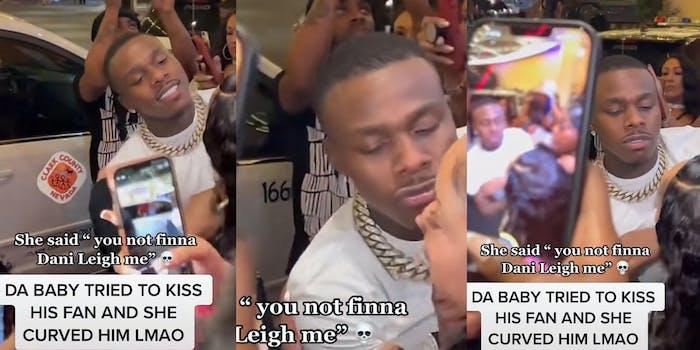 ‘The entitlement’: DaBaby criticized after fan rejects his kiss

'Reason 729 why I stopped listening to him.'

Jonathan Lyndale Kirk, the popular rapper known as DaBaby, is being widely criticized online after allegedly attempting to kiss a fan without her consent.

Footage of the incident, which reportedly took place outside of a venue in February, surfaced online this week and immediately went viral.

The video appears to show DaBaby grabbing a fan’s face with both hands before attempting to pull her in for a kiss. The fan can be seen resisting the rapper before turning her face away from his.

“Bruhhhhhhhh you can have all the money and fame in the world but if you a fuq up individual nobody wants any part of you,” TikToker @mariejean.tv wrote. “Please don’t be a da baby because immediately NO!”

Many commenters were quick to lash out at the controversial rapper, who similarly faced backlash last year after making homophobic remarks at the Rolling Loud music festival in Miami.

“He cant believe she rejected him!!” one TikTok user wrote. “The entitlement.”

Some argued that DaBaby was being overly aggressive as well, while others described his actions as nothing more than “assault.”

“He’s out of control ALL THE TIME,” another added.

Multiple users also stated that they had stopped listening to the rapper’s music due to his long history of inappropriate behavior.

“Like why he acting like that?” one TikToker asked. “Reason 729 why I stopped listening to him, he thinks he can get whatever and he can not!”

The video was also shared on Twitter by the No Jumper podcast, racking up nearly 9 million views in the process.

Twitter users responded to the footage by arguing that many were downplaying the incident.

The video was also described by many as “terrifying” and a clear case of “harassment.”

“y’all will do anything to avoid saying the phrase sexual assault,” @twerkfasosa said.

DaBaby eventually responded to the controversy on Thursday in two stories on Instagram. But the rapper didn’t apologize for the alleged wrongdoing. Instead, DaBaby outright denied that he ever attempted to kiss anyone in the first place, referring to the footage as some “cap ass shit.”

The rapper defended himself by sharing an entirely separate clip from the same day in which he is seen being embraced by other fans in the crowd.

“Me and my booboos love each other to death but ain’t no kissin goin on,” he wrote.

In a follow-up post on his Instagram, DaBaby also shared another clip of an excited female fan holding on to him. The rapper appears to be suggesting that because he can show examples of some female fans embracing him, all of his female fans must feel the same way.

Yet none of DaBaby’s responses have directly addressed the original footage, which he continues to claim is somehow inaccurate.

Representatives for DaBaby have thus far declined to release a statement on the matter. We’ve also reached out to a representative for DaBaby.