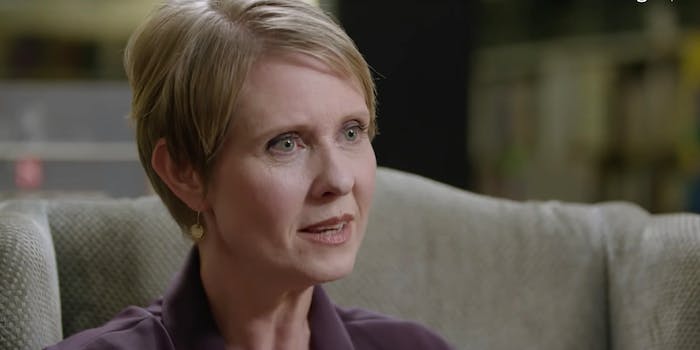 Photo of Cynthia Nixon on a subway platform becomes a meme

The campaign of Cynthia Nixon, the former actress and progressive candidate running in New York’s gubernatorial race against incumbent Democrat Gov. Andrew Cuomo, has picked up more steam than many would have guessed when she first announced her run. And Nixon’s latest campaign photo is picking up some major meme steam.

On Friday afternoon, Nixon shared a photo of herself standing on a subway platform and pointing up at a train schedule sign doctored to list two of her biggest campaign promises: One, “tax the rich” and two, “fix the subway.”

Fares keep going up, but #CuomosMTA keeps breaking down.

Pitch in a swipe ($2.75) if you were delayed today, and show Governor Cuomo you’re ready to join the fight to #FixOurSubway: https://t.co/QR5NgcSYeB pic.twitter.com/QVLPpbQ8Qm

The format of the photo (and the anomaly of a subway sign that works) caught the eye of people on Twitter, and some decided to make their own versions.

let me see you pic.twitter.com/QDNjZTUvAb

Then, if we’re talking about a multi-step process, it’d be remiss not to incorporate Dua Lipa’s “New Rules.”

And finally, for a more niche audience, there’s Brian McKnight’s steps, which always end up “Back At One.”

here are my feelings about this photo, for brian mcknight fans only pic.twitter.com/scpOlXchGc

As for Nixon, it’s yet to be seen if her suggested plan makes the desired impact, and she still has a long road ahead of her until elections in November. In the meantime, she’s asking New Yorkers to donate the equivalent of a subway fare to her campaign.