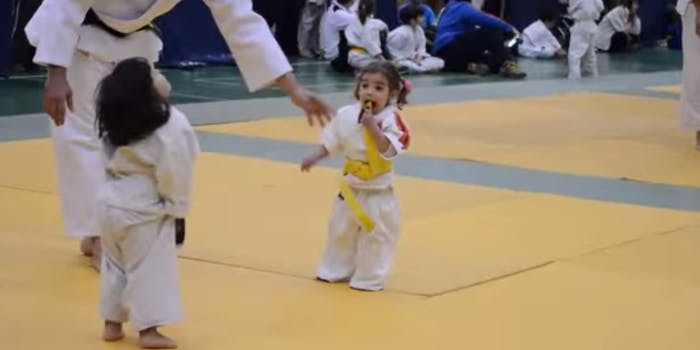 Everyone wins in the world’s cutest judo fight

These pint-size judokas bow, kick, and fall down with style.

Judo’s hardly an ancient sport, but in the era of the Internet, its history goes way back.

Founded in 1882 by the Japanese educator Jigoro Kano, the modern method of combat has served as a popular form of martial art, entreating into Olympic competition for men in 1964 and women in 2002. More importantly, it is one of the forms practiced by Chuck Norris.

Not that these two little girls seem to care.

Stepping into the ring as yellow belts, these two homegirls prove the cutest judokas in the conversation, bowing, kicking, and otherwise falling down with style for a full 1:50 of competition.

Altogether, the two engage in a grand assembly of nine takedowns, one of which is an unforced fall and another of which is a hug. This leaves it tough to tell who wins.

Besides the fans, of course.

By the way, the taekwondo version might be even cuter: