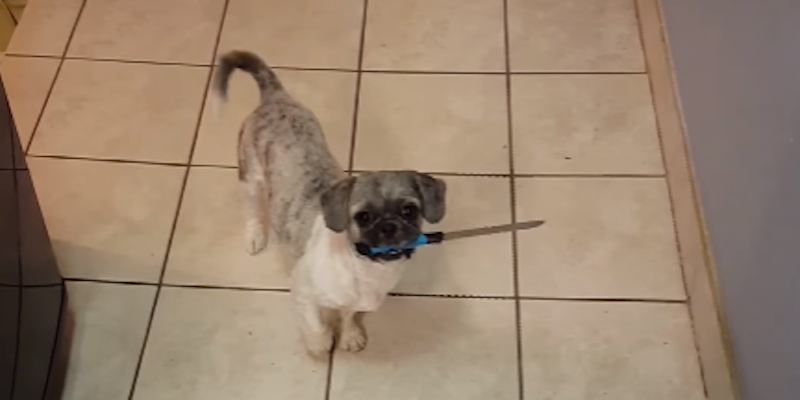 How knife to meet you, little doggie.

If there’s anything a dog owner probably doesn’t want to see, it’s the sight of their own adorable pup brandishing a knife in their teeth. And yet, that’s what apparently happened to someone this week, based on a trending YouTube video that definitely deserves the attention.

Here’s the basic rundown: YouTube user Mitch Thurman beckons to his little dog Charlie—who, as it quickly becomes clear, is holding a large knife in his mouth, crooked out to one side. It’s the perfect image for Halloween season―an effortlessly cute dog turned terrifying by way of a sharp blade―but Mitch seems eager to get him to drop the knife, for obvious reasons.

“Charlie, give daddy the knife,” he says, slowly extending his hand. When Charlie finally obeys, he snatches it up off the ground.

So far, the video has more than 250,000 views, and it’s cracked the top 25 trending videos, making Charlie one of the most popular dogs on YouTube—at least for a little while. Hopefully in the future, Charlie manages to control his endless yearning to feel the cold, gleaming steel of a knife between his teeth.