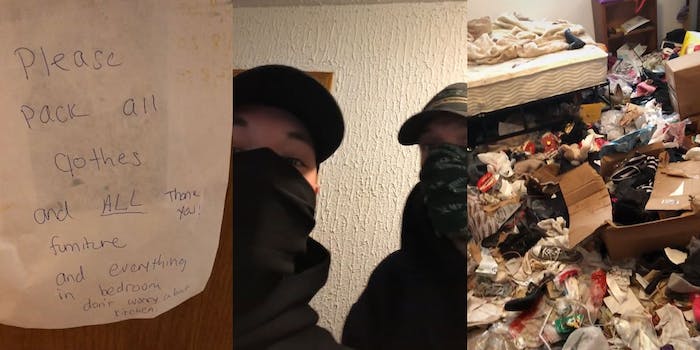 ‘I’d decline service’: Movers share ‘the sh*t they have to deal with’ in viral TikTok

'The nerve to leave that note.'

Two movers shared in a viral TikTok “the shit [they] have to deal with on a daily basis.”

The video opens with two men who claim to be movers panning the camera around a room. “What the fuck,” one of them says. “She expected us to move this shit.”

The floor is nearly completely covered with various items. The duo then show a note taped to the door. It reads: “Please pack all the clothes and all the furniture and everything in the bedroom don’t worry about the kitchen.”

The men then take viewers into other rooms that are in a similar state. “I can’t even be in here; I’m about to throw up,” one says.

They claim there is “dog shit all over the floor.”

“There’s spoons and food,” they continue. “What the fuck, bro. I’m a clean freak, dog. I can’t. … Dog shit fucking everywhere. This is ridiculously crazy. I cannot believe it.”

The video was posted by @will_the_mover earlier in the week, and it has since been viewed 2 million times since. Viewers are sharing what they would do if they were in the workers’ place. “I’d decline service,” one said.

“I wouldn’t touch any of it,” another wrote.

“I would call her and be like ‘umm someone broke into your home, you may want to clean it then we will be back,'” another suggested.

Many were stunned the customer expected the movers to pack up the belongings. “The nerve to leave that note lol,” the top comment reads.

The TikToker later posted a follow-up. “Didn’t expect that video to blow up how it did,” he says.

He lets viewers know they refused to move the customer’s stuff. “There’s no way I could move it,” he says before calling the home “one of the dirtiest houses I’ve ever walked into.”

“I’ve been doing moving for a long time, and that was the nastiest I’ve ever seen,” he adds.

He then gives the alleged “backstory” to the situation.

“She supposedly wasn’t living there,” he says. “It was her and her boyfriend. Her boyfriend got depressed. … So I guess he just stopped cleaning. She left, left the dog there. … And it just went bad from there.”

He says that “as a mover, we see shit like that on a daily basis.”

He says they ultimately canceled the move and believes no moving company will accept that job. “She needs to call a junk specialist or a hoarder clean-out specialist,” he recommends.

The TikToker notes at one point in his follow-up that the customer’s boyfriend got depression during the pandemic. While many viewers feel for the customers, they also expressed concern for the movers and the dog.

“Is the dog okay though?” one viewer questioned.

“Hope they get the help they need,” another said.

According to a news release by World Health Organization (WHO) in March, there was a global rise in depression due to the pandemic. “One major explanation for the increase is the unprecedented stress caused by the social isolation resulting from the pandemic,” the news release notes.

WHO Director-General Dr. Tedros Adhanom Ghebreyesus called the newly learned statistics a “wake-up call to all countries to pay more attention to mental health and do a better job of supporting their populations’ mental health.”

Some viewers lauded the movers for their handling of the situation. ‘At least you didn’t shame her,” one said.

“Good for you!” another praised, referring to how the movers turned down the job.

The Daily Dot has reached out to @will_the_mover via TikTok comment.