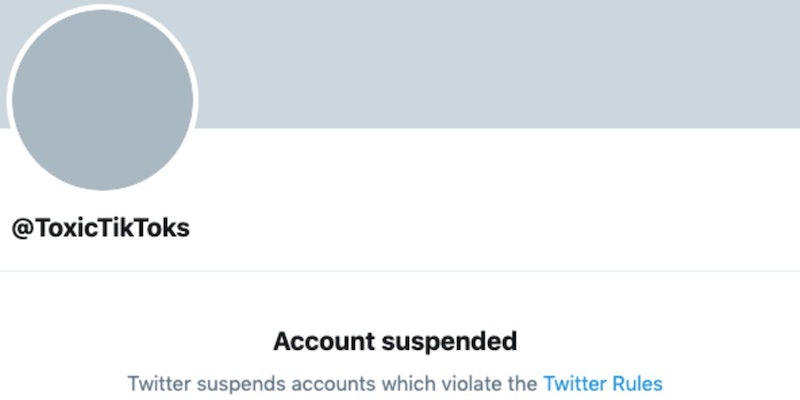 'I'm sorry I can't curate bad content for you anymore.'

The account was made popular by posting the cringiest of the cringiest TikTok videos ever made, including videos featuring people dancing awkwardly or lip-syncing badly. When Twitter suspended the account, Cursed TikToks had over 338,000 followers.

@Tabootiktoks, an Instagram page claiming to be associated with the Twitter account, is pointing the finger at Jukin Media, a media company that purchases viral videos from the creators, and then licenses them for news outlets or other companies to use.

Update 5:00pm CT, Aug. 16: Mike Skogmo, head of marketing and communications at Jukin Media, denied the allegations in a phone interview with the Daily Dot. Skogmo claims that a troll account, pretending to be a representative for Jukin Media, filed DMCA reports with Twitter against the Cursed TikTok account. The alleged troll account also appeared to be using Skogmo’s photo for its Twitter avatar.

“Jukin Media did not issue the takedown,” Skogmo said. “The DMCA notices against the account were not filed by Jukin Media; rather they were filed by a fake troll account, presumably to make Jukin look bad.”

This post has been updated to include comments from a Jukin Media spokesperson.

The Daily Dot has reached out to @Tabootiktoks.