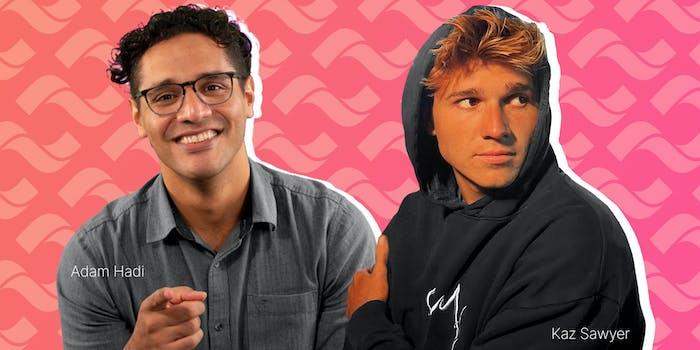 Inside the next generation of brand-creator partnerships

To better understand the brand partnership process, the Daily Dot spoke with Vice President of Marketing Adam Hadi, and Kaz Sawyer, a vlogger with over 5 million followers who frequently partners with Current, in exclusive interviews. We chatted with them about how they got started with brand partnerships, why creators might want to partner with a company like Current, and what they think makes a marketing campaign successful.

Hadi has been working with creators for about 10 years. Hadi said he first encountered the possibility of marketing with creators while working with the sports trading card company Topps. After stumbling upon FIFA YouTube videos, he pitched the idea of working with digital creators: “Trust me, 10 years ago, that was a much harder pitch than it would be today.”

“I was kind of naïve, and I was like ‘Hey, do you want to talk about our app? Seems like a good fit, we’ll pay you money!’ They didn’t know what the hell to do either, but it worked,” he said.

For a number of years after that, Hadi was a freelance influencer marketing consultant for clients like SeatGeek, Epic Gaming, Quidd, and more. Hadi told the Daily Dot that based on his success working with creators, Current sought him out.

“They said ‘Hey, we’re doing this thing in the financial space. The financial space has no good marketing, nobody who understands Gen Z. We think we have the opportunity to build something really special.’ So I said ‘Yeah, fuck it, let’s do it.’”

“While finance apps might not be that interesting for content, money really is,” Hadi said. “When a creator promotes us, it’s ‘Hey, I’ve got this great idea. I wanted to do this really cool thing, and it costs a lot of money. So I’ve partnered with Current to make it happen.’”

Hadi said that it’s not a creator’s job to make an ad explaining all the details of Current’s product: “The best outcome is when a creator really understands a business and then translates that into whatever the hell they want. Because they understand their audience better than anyone else. It would be stupid for us to tell them to say x, y, and z.”

One ad Current sees as a success with is YouTuber Airrack’s holiday giveaway video, which garnered over 5 million views. In the ad, Airrack doesn’t go into much detail about what banking services are offered by Current. Instead, he goes to the mall to give free gifts to shoppers using his Current card, and tells his followers they can download Current for a chance to win $500.

Kaz Sawyer—a TikTok vlogger who often does pranks, experiments, and giveaway videos—echoed Hadi’s sentiments. Sawyer has been making content for about two years now, and after only six months into his online career he began to partner with brands. As his career progressed, Sawyer said he learned how to better work with brands.

“If you can tell it’s a straight-up ad, and it seems unnatural, you’ll just want to scroll. There’s definitely certain companies that are known for that, and that I’ll try to steer clear of.” Sawyer continued, “When they allow you to have some sort of creative control it makes for so much more of a mutually beneficial relationship.”

One of the benefits Sawyer says he receives is raising his production budget. “I have a lot of ideas and some of my ideas are a bit out of the ordinary. So it’s really cool when they’re able to help.”

Some of Sawyer’s sponsored videos include “making it rain” money in downtown Los Angeles, throwing a Thanksgiving feast for strangers, and paying for people’s holiday shopping.

Sawyer said that some of his partnerships have gone worse than others. He filled us in on some of the challenges he’s faced: “Being on the same page about the video idea and video approval. Sometimes communication. If it’s hard to communicate with a company, things that should take days end up taking weeks.”

We asked Sawyer how creators can know and advocate for their worth with brands. “You have to talk to people around you. Also just trial and error and experience.” Sawyer continued: “A lot of people have managers, and when that happens the manager will tell them their worth. Other people don’t have managers and have to learn for themselves.”

Hadi also suggested talking to your peers about what they are making. “I don’t consider any of my deals to be confidential. Nor do I want to be coy about this. We believe in paying people fair rates.”

“One way to get there would be to ask for an affiliate deal,” Hadi said, “Oftentimes creators tend to want to be paid a guaranteed flat rate or maybe something based on views, which totally makes sense to me. But then on the brand side they have to guess, what do we expect the conversation rate to be.”

Hadi continued, “On the flip side of this, if a creator asks to be paid per sign-up or percentage of revenue the brand is not taking any risk in terms of performance and they may be able to raise the ceiling on what you will be paid. If creators want to get an idea of what they are worth, that may be the way to do it.”

Both Hadi and Sawyer also advised creators to be selective.

“You want to work with fewer brands in a bigger way,” Hadi said. “If every other video you put out has a different sponsor, it gets a little bit diluted. Having a deeper relationship with a few is always going to be stronger, and allows you to tell a story over time. The brand isn’t just a sponsor, the brand becomes a character.”

Sawyer said something similar. “There’s some people I’ve seen where they start to get a following and they just go with a huge quantity. Then, all of a sudden their page is just flooded with brand deals and it just kills the engagement.”

Hadi and Sawyer also encouraged creators that are just starting out to take initiative.

“There’s nothing wrong with smaller creators reaching out to companies almost right off the bat that they believe in,” Sawyer continued, “You should start practicing early on in your creator career reaching out and seeing what can happen. There’s no downside to doing that.”

Hadi echoed this statement. “You could be opportunistic and sit back and wait for brands to come to you, or you could be proactive.” Hadi continued, “Certainly if you’ve seen a company or brand advertising in the creator space that maybe gives you a better shot of saying yes. But honestly even if they haven’t, it could be that they’re waiting for the opportunity.”