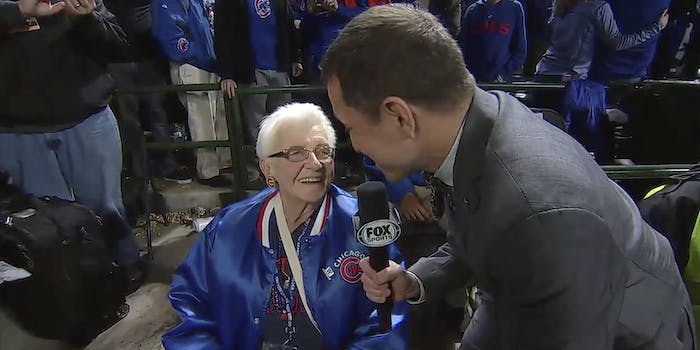 Get this woman an endorsement deal, Jägermeister.

The Chicago Cubs made history on Saturday night when they shut out the Los Angeles Dodgers 5-0, got that key fourth win, and advanced to the World Series. The team’s NLCS victory marks the first time the Cubs have won the pennant in seven decades.

Needless to say, the team and its fans were pumped.

A bit of the Wrigleyville craziness. Yay Cubs! #FlyTheW pic.twitter.com/8HJF4qWVM6

Now that I've got signal again, here's the moment the line breaks: pic.twitter.com/K5pGvqNXso

Perhaps none more than 90-year-old Dorothy Farrel, who’s had season tickets one row from the visitor’s dugout since 1984 and has been a lifelong Cubs fan. To Farrel, and to many fans, it’s more than just supporting a team and being a baseball fan.

Poised and reflective, Farrel recalled what the victory she never thought would happen meant to her. “I just wish my brothers were alive to see this because I had a brother killed in the war and another brother [who was a] prisoner in Germany for 21 months and two other brothers overseas and they loved the Cubs,” Farrel said. “And my father did too. And they’re all dead now. And this old lady’s still living.”

So, what’s she going to do to celebrate? Drink a Jägermeister, which is a seriously solid plan when it comes to living it up.

The Cubs and Indians face off in game 1 of the World Series on Tuesday. That’s just enough time to ship some bottles, Jägermeister. Hint hint.