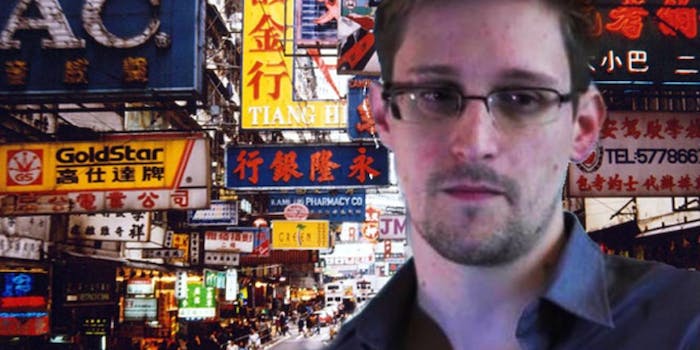 The Crowdtilt fundraiser is already more than halfway to its $10,000 minimum goal.

As Edward Snowden faces possible extradition from Hong Kong, U.S. citizens grateful for what may be the biggest whistleblowing of American security policy in history are starting to mobilize their support.

From petitions for his release to public rallies in Union Square, the 29-year-old former CIA tech who told the Guardian he did it all for Internet freedom is rapidly becoming the face of the debate over privacy versus security in an increasingly public American society.

The U.S. government may bring swift retribution upon Snowden for his part in leaking documents proving the vast extent of the NSA’s PRISM program for accessing everything from personal emails to file transfers, real-time chats, and more.

But if one Crowdtilt fundraiser has anything to say about it, Snowden won’t be facing the wrath of the law alone. Campaigners are hoping to raise anywhere from $10,000 to $15,000 to thank Snowden for his bravery and hopefully assist him in what will no doubt be his impending legal troubles.

Crowdtilt is a crowdsource campaign website that allows fundraisers to set a goal as well as a point at which the funds can be used for their intended purpose, or the “tilt” point. A day into the campaign, the campaign for Edward Snowden is more than halfway to its tilt point of $10,000.

“I do not want to live in a world where everything I do and say is recorded,” Snowden told Guardian reporters as he awaited his fate in Hong Kong, in hopes that he could rely on the government there for support, or else make his way to Internet-rights-friendly Iceland. Things are looking grim; the New York Times is already speculating that Hong Kong won’t keep him safe if the U.S. formally submits an extradition request.

The creator of the Crowdtilt campaign for Snowden is apparently former Bravo reality TV star Dwight Crow, who recently went to work for Facebook after selling his startup, Carsabi, to the company.

Crow hasn’t commented publicly on the Snowden scandal; he also hasn’t explained to Crowdtilt contributors how he plans on putting the money in Snowden’s hands if the fund reaches its $10,000 tilt point.

In fact, it may be impossible to get the money to Snowden directly. If his assets were seized, the funds could go directly into the hands of the federal government.

Still, if the groundswell of general support for Snowden can translate into Crowdtilt dollars, the contributors, who so far number just under a hundred, could send a clear message from advocates of Internet freedom to the NSA–one it won’t need a shady security program to intercept