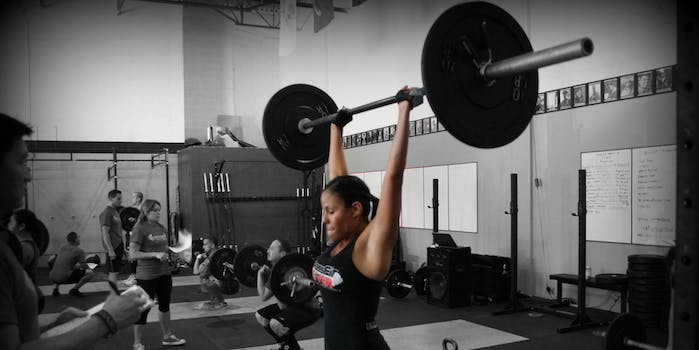 Photo via CrossFit Fever/Flickr (CC BY 2.0)

CrossFit’s takeover is bad for fitness

It's not just that CrossFit is physically dangerous—the rhetoric is just as damaging.

There’s a reason that I have never participated in CrossFit, personally, and it’s that it strikes me as rhetorically and physically dangerous. Rhetorically, because there’s a quit-whining attitude and physically because that attitude is sometimes applied even to real injuries that really shouldn’t be ignored. I have permanent injuries in my forearms as well as not permanent but persistent and sometimes fickle injuries in my neck and back that I have to accommodate in my workout routine. I don’t trust a CrossFit coach who paid $1,000 for a two-day weekend certification course to understand how to accommodate those so that I can still write for a living without my hands being in a prohibitive amount of pain.

Oh, that’s another thing. CrossFit is not a particularly well-established form of exercise, so it’s not well-researched. It’s impossible to study it in any academic way; you just kind of do it. Because of that, there’s no guarantee that your coach actually knows how to coach or train. Coaching or training often—not always, but often—seems to entail yelling at people to go harder and shit like that.

It’s possible, of course, to find a CrossFit coach who studied sports therapy and has certifications and credibility out the wazoo. But you really have to look. Even then, the cost is incredible for what amounts to being group classes. I couldn’t find membership pricing for most CrossFit gyms in my area, which alone is always a red flag for me, budget-wise—if someone won’t tell me the price upfront I have to imagine there’s a reason they want to hide it, that reason being that they want me to come in for a promotional “free” experience and then make a sales pitch to me about their dubiously over-priced product (this goes for anything—wedding venues, for example, pull this all the time). But I did find a few, and it seems fairly representative that you’d be looking at $200 a month for a CrossFit gym membership.

That is insane. My gym charges $800 a year for its best membership that has all the bells and whistles, including free access to martial arts classes with very well-qualified senseis. Mine costs less than $400 a year, because I don’t do classes. I still get access to a wealth of well-maintained strength training equipment, as well as cross-training and cardio equipment. For $200 a month, I could have weekly one-on-one personal training sessions and my regular membership. The idea of paying $2,400 a year for group classes with probably underqualified coaches is baseline unacceptable to me.

At some point, your gym membership, or your fitness program, becomes a status symbol rather than a choice for your health. (And really, how healthy, in the strictest sense, can a fitness program be if it’s cozy with rhabdomyolysis, a potentially fatal muscular syndrome that is extremely rare outside of CrossFit?) The cost of CrossFit along with its not-elite-but-elitist mentality, that being incapable of or unwilling to do more and more and more reps is equivalent to a sort of moral or spiritual weakness rather than self-preservation, is, bottom line, just a way to boost your ego by doing two insane things at the same time—wasting a tremendous amount of money and exercising to injury. And it is insane, not strong or sacrificial.

The rhetoric comes to the point that doing any form of exercise other than CrossFit is somehow lesser. Even in the lifting community, but especially in CrossFit, marathon running (of all things) is seen as weakness because it doesn’t lead to you getting jacked. Never mind the focus, long-term dedication, sacrifice of time, lifestyle changes, and physical ability that go into becoming a long-distance athlete—only resistance training is real exercise. CrossFit proponents and the most hardcore proponents of the most hardcore resistance training lifestyles will actively lie about and misrepresent endurance sports by saying things like “studies show” without citing those studies and providing context for them.

So much of the CrossFit culture is based on asking “What do you want to look like?” rather than more important questions about how you want your heart to function, what you want to be able to do, what accomplishments would make you proud. It’s endless repetition of very difficult exercise with the aim of looking a particular way, not specific training designed to enable you to achieve a particular amazing goal and stay healthy in the process so that you can continue to do amazing things long-term. And I appreciate the fact that some people want to work out to look different—that’s totally legitimate!—but to have the attitude that not exercising in the same way for the same reasons is abhorrent.

In other words, CrossFit is shallow. It’s an insubstantial lifestyle. It’s wandering aimlessly through dangerous, hardcore resistance training with the justification that the mere act of participating in it makes you cool, whether or not your participation has amounted to any particularly interesting achievements. And no, I’m not saying that everyone’s goal should be to run a marathon or do a triathlon or something. But I admire the people at my gym who want to lose five pounds this month, or break their lifting plateau, or run two miles without stopping, or enter a regional martial arts competition, or do one single pull-up, more than I respect a whole group of people who are into their fitness choices not for their health (again: rhabdo) but for their looks, their cred, and their culture’s encouragement to collectively sneer at people who are doing “less” than them at the gym.

I hope CrossFit changes. I hope one day I don’t hate the entire idea, or the culty way CrossFitters talk about it, or the way business is done, or the nonchalant attitude toward injury. Maybe it’s in its proto-stages right now, and one day it will be the greatest cross-training culture on Earth. But maybe, for now, CrossFit enthusiasts can stop treating it like it already is.

Photo via CrossFit Fever/Flickr (CC BY 2.0)