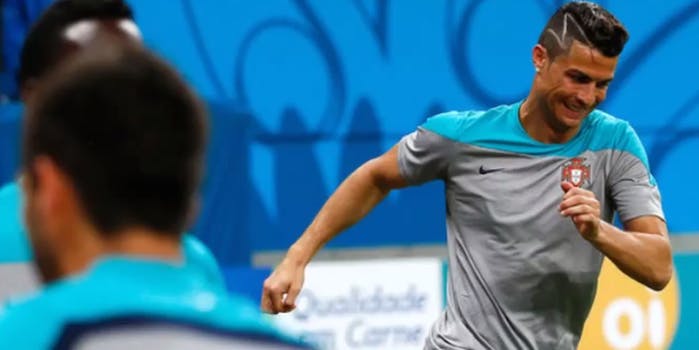 But the guy still deserves some credit for his philanthropic work.

Cristiano Ronaldo’s bizarre, seemingly late ‘80s-inspired barbershop zigzag haircut caught instant ridicule Sunday during Portugal’s dramatic draw with the United States at the World Cup. But according to one unconfirmed source, you’re actually a jerk for making fun of it.

Ronaldo cut his hair to match the scar of a young fan who had surgery to remove a brain tumor last week #respect pic.twitter.com/zGqAFS7DN7

While Ronaldo has yet to publicly clarify whether the cut was tribute or fashion statement, this notion is entirely possible. The guy’s Wikipedia page has a section that outlines his philanthropic ventures—most of them involve sick children. In March, Ronaldo did pay £50,000 (about $85,000) for the successful brain surgery of Erik Ortiz Cruz, a 10-month-old child suffering from cortical dysplasia.

But cortical dysplasia is a brain condition where, essentially, neurons are abnormally large and misfire signals near the cerebral cortex, causing seizures. That has nothing to do with brain tumors. There are flatly no credible sources reporting that Ronaldo paid for a fan’s brain tumor last week, and the cited article is almost four months old.

There’s never been a bigger chasm between “commendable, righteous” and “preening toolbag” with respect to one haircut. But given Ronaldo’s honest and real life efforts to do good, American fans would be wise to find a new villain.