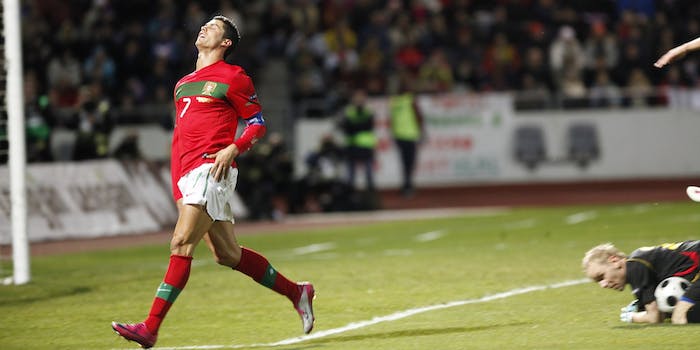 It's definitely bigger than Messi's.

From his astounding footwork on the field to his chiseled cheekbones, it’s an understatement to say that Cristiano Ronaldo has been blessed with many gifts. But Ronaldo’s most natural gift was on glaring display on Sunday, when a statue of the famous footballer was unveiled in his hometown of Funchal, Portugal.

I feel so proud to be honoured with a statue in Madeira. It's a huge joy to share this mome… http://t.co/0PxRpyOc6q pic.twitter.com/afbBvaGQPN

Proud indeed! Portugal’s prodigal son’s prominent package has now been immortalized in bronze. It will welcome visitors to the CR7 museum, which is dedicated to the athlete’s career. But Ronaldo’s massive bulge did not go unnoticed. Twitter had some fascinating reactions to the ten-foot-tall erection.

“Just make sure the bulge is bigger than the Messi statue…” Cristiano Ronaldo tribute erected in Madeira pic.twitter.com/y5fQtZDwqA

Going by Cristiano Ronaldo's statue, he's the first man ever to dress on both the left and the right simultaneously pic.twitter.com/otYRYa0gwQ

I feel so proud to be honoured with a statue in Madeira. It's a huge joy to share this mome… http://t.co/0PxRpyOc6q pic.twitter.com/afbBvaGQPN

Somewhat disappointed that Cristiano Ronaldo didn't use this as the inspiration for his statue. pic.twitter.com/N7KSLqW6bh