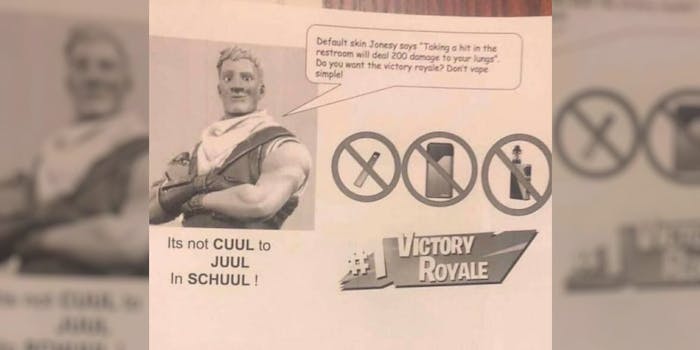 'It’s not CUUL to JUUL in SCHUUL!'

Juuls are pretty popular with the kids, so much so that the FDA plans to restrict their sales in convenience stores. In the meantime, high schools reportedly have their own approach to the vape pen crisis and, unfortunately, Fortnite is involved.

Case in point, SoAR Gaming’s Chief Operating Officer Mustafa “Crude” Aijaz shared one flyer telling teens that “It’s not CUUL to JUUL in SCHUUL!” The warning features Fortnite’s default character Jonesy saying, “Taking a hit in the restroom will deal 200 damage to your lungs,” which is equivalent to losing full health and full shields in Fortnite: Battle Royale.

In other words, Jonesy is telling kids not to vape or they’ll, you know, immediately die.

“Do you want the victory royale?” the poster reads. “Don’t vape simple!”

really glad I'm not in highschool during the the Fortnite & JUUL age pic.twitter.com/miabghaNwM

Whoever created this poster is teaching our youth. Great.

I just choked on my water

I hate being a millennial

In an interview with the Daily Dot, Crude said the picture was tweeted to him by one of his fans, Twitch streamer Logicofsquare, who said he had to engineer the flyer for a design class.

“They were asked to engineer Fortnite & JUUL to create an anti JUULing campaign I guess and I found it hysterical when I read the term ‘It’s not CUUL to JUUL in SCHUUL’ so I decided to post it,” Crude told the Daily Dot.

While the flyer was made as a joke, Crude’s post isn’t the only Fortnite vaping PSA reportedly being spread around schools. In fact, the warnings seemingly first hit the internet in November, when redditor u/HaloApplePie shared a post on r/FortNiteBR with Fortnite’s “The Reaper,” more commonly known as “John Wick,” telling students that vape clouds “reduce visibility, causing me to lose my chances at a Victory Royale.”

“To encourage you, John Wick has left some epic facts about the harmful effects of vaping!” the PSA reads.

In an interview with the Daily Dot, HaloApplePie disclosed that the PSA popped up at the user’s high school, Castle High School in Newburgh, Indiana. That student believes the school is trying to convince students to stop smoking Juuls, where Halo guesses “more than 50 percent use Juuls.”

“I first found the John Wick flyers in the restrooms. Some people would take them and flush them down toilets, usually clogging them,” HaloApplePie told the Daily Dot. “I’m sure our school made these posters to stop the widespread use of Juuls and other E-Cigs, but it seemed to backfire and many students took this as a joke.”

More recently, the meme took off in full force after redditor u/Whizz posted a completely different warning on the subreddit r/ShrineOfJonesy, dedicated to “the greatest Fortnite default character model.” That PSA, which Whizz told the Daily Dot he got from a friend, uses the same message as Crude’s tweet, but it warns that vaping “will make your pump do only 8 damage” and that vaping chemicals will endanger “you and the safety of our school.”

After Crude’s tweet yesterday, Twitter users began posting variations of the PSAs, including ones that have popped up at East Lake High School in Tarpon Springs, Florida, according to a student who spoke to the Daily Dot.

In the meantime, one redditor created a high-quality PDF version of the “It’s not CUUL to JUUL in SCHUUL!” PSA, if you want to spread the word in your local high school or college.

As for Crude’s viral tweet, he wasn’t expecting the photo to blow up. However, he thinks he understands why it’s performing so well: It’s a strange time to be a teenager in 2018.

“It just seems like many people resonate with it and find it as hysterical as I do,” Crude told the Daily Dot. “They much rather not be in high school in this day and age either due to the Juul trend, Fortnite memes, Fortnite Dancing in the hallways.

“I know I wouldn’t be able to handle the cringe,” he continued. “I just graduated high school 2 years ago.”