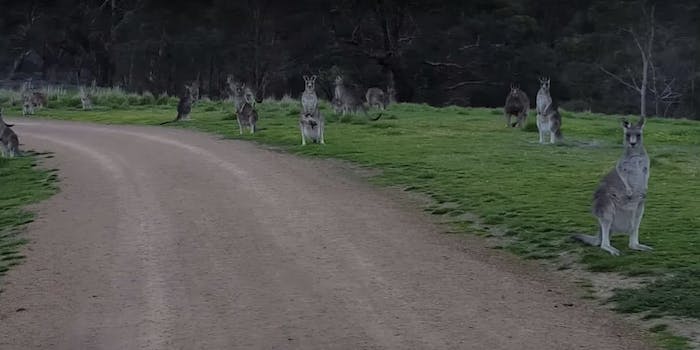 It's quiet among these kangaroos...a little TOO quiet.

Never has a marsupial appeared more horrifying than when standing among hundreds of other marsupials.

What are these kangaroos doing? Are they plotting? They’re probably plotting. Kangaroos are known for their plotting.

The video comes from cyclist Ben Vezina, who biked through the crowd of oddly still and silent kangaroos in Hawkstone Park in Victoria, Australia. In the video, you can see the posse of kangaroos staring cautiously at the equally cautious cyclist as he slowly pedals through the scene.

“Kangaroos are nice animals who don’t gather like hordes and attack people,” Vezina wrote. “They coexist with people and never attack them. This video is proof.”

I wouldn’t be so sure, Ben. Those kangaroos are a little too quiet. It brings to mind the “harmless” murder of crows that congregated quietly, too quietly, much to the dismay of Tippi Hedren.

Things didn’t go so well then, either.