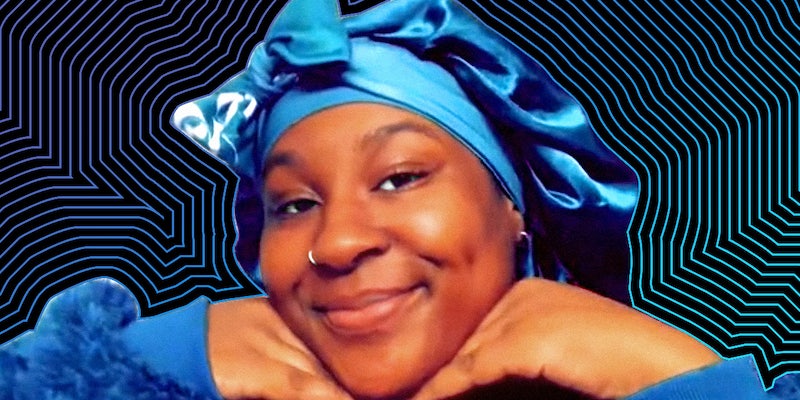 Noir is like the older sister we all wish we had.

She’s the person you turn to when you want to, against all advice, unblock your ex. She can make you feel better when you’re having problems with your self-esteem or mental health. In each of her videos, her skin is glowing in warm, comforting lighting, and you’ll never see her without her signature bonnet on her head.

Cindy Noir, better known as ebonie_qt on TikTok, Twitter, and Instagram, is like the older sister we all wish we had. The self-described content creator and motivational speaker has hundreds of thousands of followers across all of her platforms, where she speaks candidly to her audience about dating, relationships, and life.

While incredibly popular on TikTok, Noir actually got her start online on Twitter, when she began going viral in 2015. She tweeted a clapback that went so viral that it reached celebrities like Snoop Dogg and was featured on the Instagram page, the Shade Room. “Back then, for your tweet-reach the Shade Room, it was a big thing; it was a big, big deal,” she says. After that viral tweet, she began to go viral often on Twitter, and that led to her gaining a large following on the platform. It wasn’t until January of 2021 that she downloaded TikTok.

On TikTok, Noir amassed over 450,000 followers, and it’s not hard to see why. Noir’s content runs the gamut, but the one common factor is her ability to make you feel normal. And her appeal comes from how intimate her videos are. Noir will either stitch another TikTok, respond to one of her comments, or speak directly to her audience. It’s a simple, yet effective formula. She speaks directly to the camera—her viewers—to get her message across. For example, in one video, Noir stitches another TikTok to relay the message: “Your love is a privilege.” It’s textbook Noir, taking a feeling that we internalize when we’re unsuccessful in dating and making us feel seen.

On TikTok, Noir feels as if she can explore different topics with a candidness that she may not have on other platforms. She describes her TikTok community as one that is positive, where people are open to watching her videos without going straight to criticism. This juxtaposes sharply with a platform like Twitter, where Noir says people are looking to be more critical. She often finds herself double-checking what she posts on Twitter, in fear that people will take what she says the wrong way.

Her audience is made up of 90% women, many of them women of color. It’s an audience that is looking to validate their own experiences through the authenticity of someone who has been through it before. This is something Noir can provide in spades. In a video where Noir explains how to get over emotional unavailability, her followers commented things like “I needed this so much, thank you!” and “Your soul is dope and I love the gems you drop.”

“I feel like I can reach people, especially those younger than me to view situations differently, and not take it so personally to where they feel like they don’t want to love anymore, or they’re done… I know how many L’s I took when I was younger,” Noir says before emphasizing: “Especially in your early 20s.”

Authenticity is something that I spoke to a lot with Noir. In every single one of her videos on TikTok, she is wearing a bonnet. They are always a beautiful jewel tone, and they look great on camera, but at the end of the day, it’s a bonnet. In the Black community, particularly recently, bonnets have become political (which is pretty outstanding for a piece of sleepwear).

When Noir first started TikTok, she wanted to be able to make one-minute videos at any time. She didn’t want to feel like she had to put on a face full of makeup or do her hair before she could record. She had no idea that her TikTok would blow up so quickly; the bonnet was an act of convenience.

But not too long after, Mo’Nique, the iconic comedian and actor, made waves for an Instagram video in which she told Black women to stop wearing bonnets in public. You couldn’t go anywhere on the internet without hearing somebody’s opinion on it.

“It kind of angered me and frustrated me that we were under so much scrutiny. … I said, you know what, I had already been wearing bonnets on my page. … I’m going to take a stand and make it a rebellion,” Noir says. Noir pointed out that Black women get ridiculed for wearing bonnets in public, but a Black man can put on a bonnet to impersonate a Black woman and get famous from it. She made a video highlighting that people should just mind their own business, and from then on her bonnet became an intentional fixture of her brand. (You can even purchase her bonnets on her website.)

Being a full-time content creator isn’t easy. But after a year of sending out hundreds of unsuccessful job applications, along with the rapid growth of her TikTok this year, Noir is fully leaning into her gift and is committed to doing it full-time. “As I’ve got older, I’ve learned how to tailor that gift in a more effective way,” she says. That being said, there are learning curves she is having to navigate being a Black content creator. Although she credits TikTok for being the easiest to grow her audience and monetize, it’s no secret that TikTok’s algorithm is not on the side of Black creators. And while some white content creators can rake in thousands of dollars with brand deals, Noir finds companies offering her hundreds.

Her biggest challenge? Learning to take up space in the business side of being a content creator.

“Go bigger,” she says. “As a Black woman you are taught to shrink. The biggest challenge that I’m facing right now is learning how to take space in the business aspect and not apologizing for that.”

Chika Ekemezie is a freelance writer who writes about sex, dating, and the politics of life. She runs a weekly newsletter called twenty-something, where you can find non-answers to all the questions that 20-somethings are asking. You can find her work in publications like Cosmopolitan, VICE, MEL, and Bustle, and you can always find her on Twitter and Instagram. She's currently based in Philadelphia, but you can never take the Jersey out of the girl.