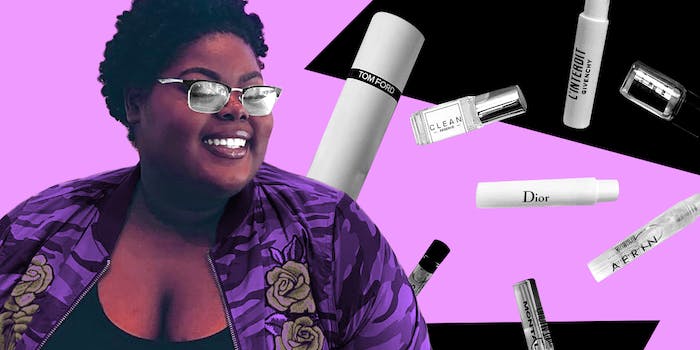 'I didn't feel like fragrance had to be something that people were kept out of.'

Maiya Gant has been a fragrance fanatic since she was a child. The Los Angeles-based creator of the Instagram account Black Girls Smell Good says that some of her earliest memories are of her mother and grandmother getting ready for church. They weren’t done, she says, until they sprayed their fragrance (both of their signatures were Estée Lauder Pleasures). She got her first bottle of perfume at 8 years old, which began what she calls a “crazy obsession.”

Fast forward 16 years, Gant has experience training and selling at stores like Saks Fifth Avenue, Sephora, and Nordstrom. She then became a freelance beauty educator helping department stores train crew members on various beauty products, including scents. Her trainees told her that they loved the way she explained things, which made her realize that she had a valuable skill on her hands.

“I didn’t feel like fragrance had to be something that people were kept out of,” Gant tells the Daily Dot of her experience selling perfumes. “Makeup brands, they can not make certain shades, right? Or fashion lines, they can not cater to certain sizes.” But fragrance, she says, doesn’t have those barriers.

When the pandemic hit, and she realized she would be home for quite some time, Gant missed beauty and continued to seek out new fragrances. She decided she wanted to make a “fragrance journal” on Instagram, and when deciding to name it, she thought about who her target audience would be.

Thus, in April, Black Girls Smell Good was born. It has since morphed into a cross-platform community for Black women to learn about fragrances and share their favorite perfumes with each other. It is a space for leisure, “a perfume playground” for people to “experience fragrance without reservation,” Gant says. Her content ranges from recommendations, reviews, dupe tests, and educational content (such as “How to layer fragrances”). Since May, Gant’s Instagram following has grown ten-fold, from just under 3,000 to over 30,000 in about three months. Black Girls Smell Good has expanded to TikTok and Twitter, amassing sizable followings on both platforms.

Prior to making her accounts, Gant noticed, despite Black consumers making up nearly a quarter of women’s fragrance purchases, the fragrance industry’s lack of representation and marketing toward Black women.

“There [were] not a lot of people of color talking about fragrance,” she says of the landscape. “When I think about it, I’m like that’s insane because everyone that I want to smell like…  Rihanna, Priyanka… these are women of color.”

In addition to a lack of diversity in the fragrance industry, historically, a big barrier to entry is language, which is often inaccessible and confusing. It can often prevent people from branching out or getting into scents at all. So, Gant wanted to make a safe space for people who want to learn more about fragrance and for ​​”everyone who’s ever gone into a department store and felt talked down to.”

“I think that people learn better when the person who’s telling them, looks like them, sounds like them. For myself, that’s the way that I learned best because I felt comfortable,” she says. ”With me, there are no dumb questions. I have questions, and I’ve been in this for years.”

Gant has a gift for explaining scents in a precise, understandable way. I asked Gant if it’s ever difficult to explain smells through the internet. She says that she’ll often use a specific memory, setting, or feeling to describe fragrances. For example, Maison Margiela’s Jazz Club smells like cocktails and cigars. But more specifically, she says, “It’s a club, but it’s a cigar lounge. It’s very dark. [It’s] dimly lit, even though the light that it’s giving off is very warm. There’s lots of wood in this place. They served their drinks in heavy glasses, and this is the darkest of brandies. But when you drink the brandy, you also smell the smoke.” Plus, she adds, a cherry is used to top off an old-fashioned. Can you imagine it?

That’s the type of description that her audience has come to love and expect. And that audience is only growing. Since launching her TikTok, specifically, two of her hashtags, #BlackGirlsSmellGood and #BlackGirlFragrenceTag, have garnered 634,000 and 2.6 million views, respectively. The newfound attention has been a pleasant surprise for Gant, although she’s still figuring out how to manage all the messages and comments she gets. She tries her best to keep up, but the notifications, as most influencers know, are endless.

“My screentime is tragic,” Gant says.

As for her favorite fragrance, she says she doesn’t have a ”signature scent” like a lot of people do since her collection is so large. Instead, she has a new “main character” scent every year—the fragrance to her 24th year being Tom Ford’s Lost Cherry.

As she approaches her 25th birthday, she’s turning toward Montale Sensual Instinct. Beyond the next year, she hopes that her cultivated community’s visibility will show brands and perfumers that they should include and hire Black women at all levels of the fragrance industry from ads to corporate. She hopes more brands hire Black influencers to talk about their products, because, she says, they don’t just get to have Black women as customers. There needs to be more representation on the other side of the transaction—on the brand side.

“I want to be a force, to be a presence so that people cannot ignore us in the community anymore,” Gant says. “Black women are here. We deserve to be represented too.