I am the author of that super-viral Craigslist ad—not this a**hole.

On Saturday night a friend sent me a link to a humorous advertisement for a dog-walker. It had been posted on Craigslist in Seattle earlier that week and had since gone viral. The ad, titled “I WILL WALK YOUR DOG,” is written from the point-of-view of a profane and frustrated Princeton grad who really wants to walk some rich people’s dogs. 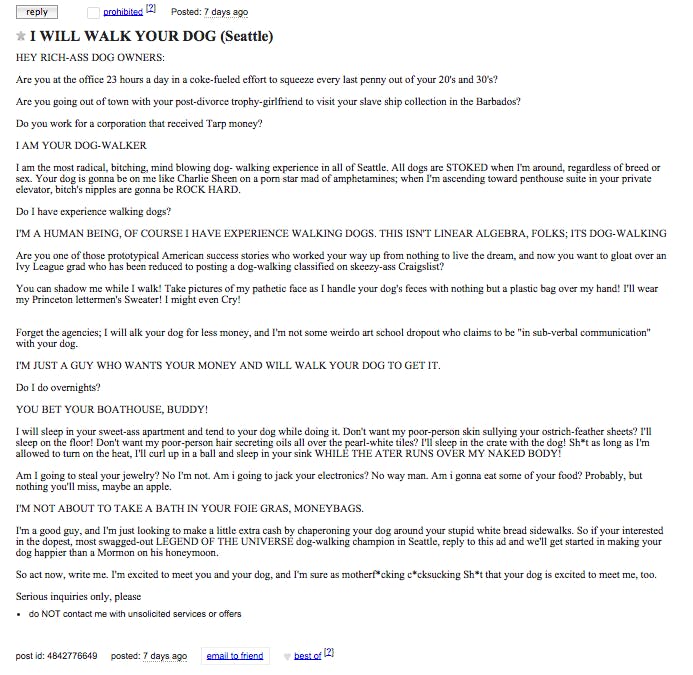 The Seattle Craigslist dog-walking ad spread quickly, garnering write-ups innews.com.au, Uproxx, Digg, NextDraft, and HappyPlace, the Someecards blog, where it received 17 thousand social shares. Mother Jones even interviewed the author, who explained he “posted it as a joke” in order “to show what happens when you go to college and stack up student loans and don’t have a plan afterwards … you’ll turn out having to walk dogs with a shitty outlook on society.”

This guy straight-up plagiarized me, word-for-word. Now I’d like to rectify a few things.

Normally I wouldn’t care so much about a Craigslist dog-walking ad, what the guy who posted it has to say, or the fact that it’s getting press coverage.

Except, in this case, I am the author of the Craigslist dog-walking ad. I wrote it four years ago. It was the first thing I ever wrote that resonated with an audience wider than my mother, and I feel like it’s been violently ripped away from me.

It is not a commentary on “student loans” or “having to walk dogs” as a career. I wouldn’t say that about the piece that I wrote, and neither should this guy, posing as the author.

This guy straight-up plagiarized me, word-for-word. Now, I’d like to rectify a few things. Normally I don’t think I would care about the actual repost on Craigslist. Preventing reposts on the Internet is like trying to walk a million dogs at once: You can control a few of them, but most of them are going to get away.

But I felt like I needed to address this a couple of reasons. First, the ad is receiving media attention, with a non-author receiving credit; there’s a need to correct the record.

And second, stupidly, this idiotic dog-walking ad holds sentimental value for me; and, selfishly, I’d like credit for it.

When I wrote the Craigslist dog-walking ad, I was fresh out of college and broke: staying on a friend’s couch in Queens, supplementing bowls of Ramen with peanut butter, brushing my teeth with 50-cent toothpaste, walking great distances to avoid paying for the subway. I wrote “I WILL WALK YOUR DOG” because I needed money, and I had heard that dog-walking in New York City was lucrative.

A friend told me that my Craigslist post had landed on the front page of a site called Reddit, which I had never heard of.

So, in a maelstrom of adrenaline, I fired off a Craigslist ad offering my services to the well-coiffed one percent, in the hopes that some NYC dog owner with a sense of humor might see it, respect the jokes, and pay me a little cash to pet-sit.

I received no dog-walking offers, but I did get the attention of the media. A friend told me that my Craigslist post had landed on the front page of a site called Reddit, which I had never heard of, and had received thousands of upvotes. Whatever an upvote was, I knew it was significant, since soon after, the post appeared in write-ups at the Daily What and the Huffington Post and, weirdly, HappyPlace, the Someecards blog. I received dozens of emails offering congratulations, plaudits, and inquiries as to my relationship status.

Strangest of all, this guy named Nick Denton kept on tweeting at me and Facebook-messaging me about a job interview. I ignored him for awhile, but eventually agreed to meet with him. Turns out he was legit.

I didn’t get the job at Gawker (wise on their part) but my Craigslist dog-walking ad did set me on the path to becoming a professional writer. It showed me that strangers—not just my family and friends, but strangers—might enjoy the words that I wrote. About a month after “I WILL WALK YOUR DOG,” I landed my first writing internship, at the pop culture site Nerve; after another month, I was offered my first full-time writing position, at the Huffington Post.

In both cases, the Craigslist dog-walking ad was featured high up in my cover letter, and I very much doubt I would have gotten either of those jobs without the confidence that “I WILL WALK YOUR DOG” gave me to apply and present myself as a real writer.

This guy named Nick Denton kept on tweeting at me and Facebook-messaging me about a job interview.

Anyway, enough with Memory Lane. You can see, I hope, why I would be particularly miffed about this piece being copy-pasted for ill-gotten gains, and then disseminated widely without any credit coming back to the author.

My point here is not to embarrass any of the outlets that posted the ad without checking if it was a carbon copy, or at taking the plagiarist at his word. (Why would anyone lie about writing something so stupid?) Nor am I all that interested in what this “says” about the State of the Media, or Internet Culture, or Capital-J Journalism in the Year Two Thousand Fifteen.

I just want everyone to know that this turd stole my work and that I’m upset about it. If you want to make a statement about student loans or income equality in the United States, write your own goddamn profane Craigslist post. Plagiarizing someone else’s work is—to borrow a term of art from my would-be career—dogshit.

Jason O. Gilbert is a senior editor at Yahoo Tech. You can follow him on Twitter here.

This article originally ran on Medium and was republished with permission.

Photo via MarkScottAustinTX/Flickr (CC BY 2.0)