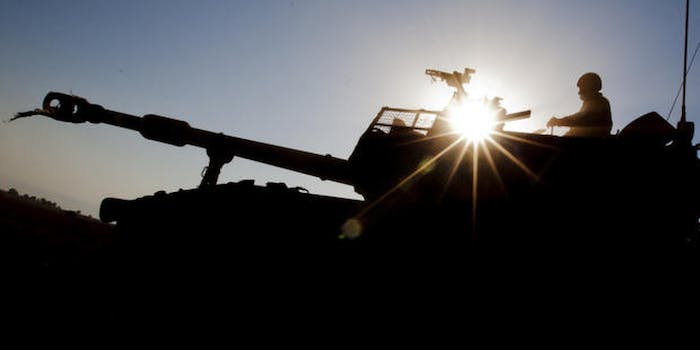 The best part: no broker fees.

One thing you learn very quickly when apartment hunting in New York: There’s always a catch. If something sounds too good to be true, then it is—or someone else bought it while you were busy being skeptical. So what would you say to a bedroom in Williamsburg for $800 a month, if living there meant a suffering through an endless conversation about Syria?

That’s the deal offered by comedian Andy Bankin in an exasperated Craigslist post—as the classified ad site has become a go-to platform for conceptual humor—but is it worth trading your normally apolitical social life for rooftop access? Maybe, if it means moments of serene reflection like this one:

Plus, it sounds like you’d get to keep all of Bankin’s stuff! Here’s the glorious ad in full:

If anyone is interested, I’m renting out my bedroom in Williamsburg, Brooklyn immediately. I apologize for the short notice. The apartment features a kitchenette, a large (by New York standards, ha ha) bathroom, and a roommate that’s going to have some opinions on Syria.

I’d like to return to my apartment, but I know that as soon as I do, I’ll be confronted by a roommate with opinions on the Syrian conflict and a determination to share them with me. The apartment has high ceilings and exposed brick along the far wall. At only $800/month it’s a steal for the location.

I won’t listen to your god damn opinions on Syria, Mike. I won’t do it.

Situated between the L, JMZ, and G trains, it’s convenient no matter where you work and the neighborhood is loaded with great restaurants and bars. It never ends with Syria. It just keeps going until he’s shared every opinion he has and then he just circles back and repeats. Utilities included.

As for me, I haven’t been home in a week. I’ve been staying late at work, and then grounding myself at a bar until last call. Then I wander the streets until dawn breaks. Cold, afraid, and lonely; content only in knowing that I don’t have to talk to my roommate about Syria.

The room is available immediately as I will never return. It comes fully furnished with a bed, a desk, my laptop, all my clothing, irreplaceable family photos, and little mementos from ex-girlfriends that I just can’t bring myself to throw away. It’s all yours. No security deposit necessary.

So please respond with a brief description of yourself and your usual schedule. Sorry, but there’s no smoking inside the apartment, but there is rooftop access with views of the New York skyline. Perfect for sunbathing or just enjoying a beer — though my roommate may trap you up there and suck you into a conversation about Syria. No pets.

Also I am currently in the market for a new apartment myself. So if you are renting out or know anyone who is, please let me know. I’m very flexible, all I ask is that there’s some form of public transportation nearby — providing access to lower Manhattan. And no roommate with opinions on Syria.

Personally, I’d have no problem tuning out a hipster who pretends to be an expert on Middle East geopolitics and diplomacy—it’s the shampoo thing that would really get my goat. But to anybody seeking out Bankin on Twitter in the hopes of more clever material in this vein, consider yourself warned by the man himself:

If you’re following me because of that Craigslist post I wrote, it’s only fair that you know…it’ll be mostly dick jokes from here on out.

Moving out? Who is he kidding—these dudes were made for each other.