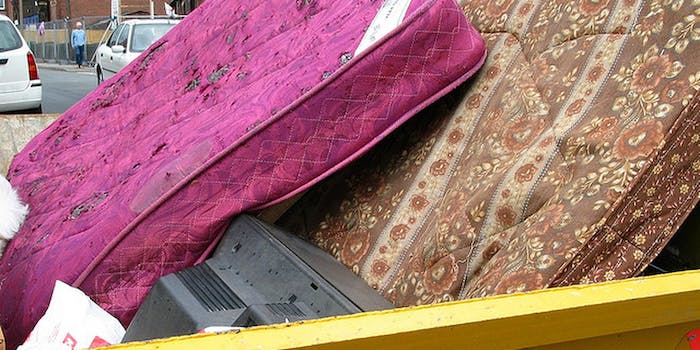 This Craigslister is selling a “bed of lies,” priced to move

Only $150, priced to move, "and feels like you're sleeping on a f*cking cloud - even when you're unknowingly sleeping next to a lying cheater."

We all have our own ways of channeling the pain of a breakup. Some of us bottle up our feelings; some of us can talk about nothing but. Some of us self-destruct; some of us are better off. But when your significant other has been unfaithful, humor is often the best defense.

This ad, posted yesterday on Craigslist, is pure post-breakup poetry. The San Francisco-based seller is offering a queen-sized Simmons Beautyrest mattress, for only $150. That’s pretty much a steal, but wait, there’s more:

“It’s three years old, and feels like you’re sleeping on a fucking cloud – even when you’re unknowingly sleeping next to a lying cheater. In a bad relationship and have to lie next to the constant reminder that you didn’t go to grad school so that you could move and get engaged? Then this is the bed for you, it will get you to fucking REM and for 6-8 hours every night you’ll forget that you’re sleeping next to a sociopath. There are no stains, and this thing hasn’t seen action in a while.”

Buying a used mattress on Craigslist can be dicey, so this is a nice heads-up. No stains, only three years old. This person is really selling us on this mattress of broken dreams. Just one more thing:

“And no, I won’t help you get it out to your car. There are only eleven steps up to my apartment. You figure it out. I was going to sell the mattress for $200 but I figured it was worth the $50 to watch someone else have to struggle over this oppressive burden. Not a deal-breaker, but it would help immensely if you looked like my ex as I would love to see an entitled, Ivy-League educated asshole struggle with this thing. But totally not necessary.”

Photo via How can I recycle this/Flickr