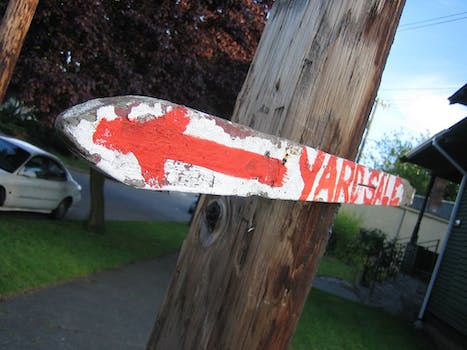 While her husband was off with his "floozie," a scorned wife sold off just about everything he owned in a Craigslist-powered weekend yard sale—sorry, LYING CHEATING SALE.

While her husband was off with his “floozie,” a scorned wife sold off just about everything he owned in a Craigslist-powered weekend yard sale. And to be more precise, it wasn’t a “yard sale,” it was actually a LYING CHEATING SALE. This is how to rage-quit a marriage, folks.

LAST MINUTE SPONTANEOUS ESTATE SALE. HUSBAND LEFT US FOR A PIECE OF TRASH. SELLING EVERYTHING WHILE HE IS GONE THIS WEEKEND WITH HIS FLOOZIE.

Feel free to imagine the woman’s fingers shattering the keyboard with each stroke.

Visitors to the LYING CHEATING SALE, held at the (former) couple’s home in Vancouver, were welcome to the man’s ART, FURNITURE, BOOKSHELVES, STORAGE CABINETS, HOUSEHOLD APPLIANCES,and pretty much everything else. Highlights, however, include his leather theater sofas (which were his “FAVORITE,”) a never-installed BRAND NEW SLIDING GLASS DOOR, as well as a LAWNMOWER.

There were also “LOTS OF TOOLS WHICH HE DIDN’T HAVE A CLUE HOW TO USE.”

Clothes, however, were off-limits. Those were reserved for a special bonfire held the night before. Visitors were welcome to look at the pile of ash in the driveway free of charge.

The woman’s only request was that visitors not to come too early (“LIKE HE DID”) because “I WILL BE THOUROUGHLY ENJOYING SOME WINE WITH MY GIRLFRIENDS THIS EVENING AS WE CLEAN OUT ALL THIS STUFF AND LIKELY BE NURSING HANGOVERS IN THE MORNING. SO PLEASE SPEAK SOFTLY TO THE LADIES WEARING THE SUNGLASSES: )

“This has to be a hoax, right?” every cheating man is whispering to himself right now as the early symptoms of hyperventilation set in. Nope.

A reporter from The Province newspaper actually visited the site and confirmed that “sure enough, bargain-hunters were sifting through the goods which included office chairs, camping gear and other offerings.” The theater seating must have already been sold by that time.

One wrinkle in this story of holy revenge: The reporter reached out to an estate lawyer, who told her the woman probably won’t get to keep all the proceeds from the sale. A divorce court usually requires both sides to account for what they have, then decides how to divvy it up. So a portion of whatever she made would probably still go to the husband.

Somehow, we don’t think she really cares either way. She concluded her ad/opus:

“LIFE IS TOO SHORT TO WASTE TIME. GOD PUT MY EYES IN THE FRONT OF MY HEAD FOR A REASON. I AM LOOKING FORWARD TO MOVING FORWARD!”