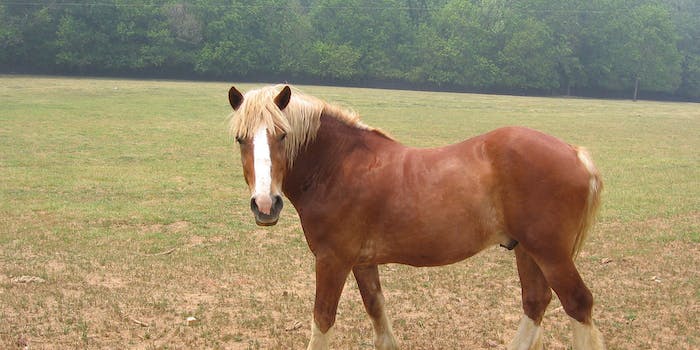 Arizona sheriff wants people to stop horsing around on Craigslist.

Craigslist’s Missed Connections section is filled with paeans to that pretty woman in a coffee shop or on the train, or tall bearded men who left without saying goodbye. Sometimes they can be elaborate and beautiful… other times, not so much.

According to detectives, Donald Waelde posted to the Phoenix Missed Connections section in early April, writing:

“I want to play with a horse. Simple as that. If you have a horse and I can have access to it… I will do something in return.” While the language wasn’t explicitly sexual, another Craigslist user suspected something was amiss and contacted the police, who went undercover and brought along a police horse as a prop. Waelde was taken into custody after reportedly admitting to putting the ad up with intent to have sex with a horse. Waelde is charged with conspiracy to commit bestiality.

Sheriff Joe Ariapo said in a statement that this is the fourth case since 2011 where suspects used Craigslist to find animals. In 2011, Ariapo asked Craigslist CEO Jim Buckmaster to step up monitoring the site for bestiality posts, saying the site facilitates bestiality.

Bestiality has been a crime in Arizona since 2006, but it’s not illegal everywhere in the U.S. Bestiality remains legal in Ohio, Texas, Vermont, Kentucky, Virginia, West Virginia, Nevada, New Jersey, New Hampshire, New Mexico, Montana, Wyoming, Hawaii, and the District of Columbia. So in those states, penning a Missed Connection for a horse (or a dog, or sheep, or monkey) will likely raise eyebrows, but it won’t get you arrested.