This terrible drawing of a cronut should probably hang in MoMA

For $200, you can buy this minimalist representation of the pastry craze on Craigslist.

Consider a recent work posted on Craigslist titled, “MOMA Rendition of a Cronut.” 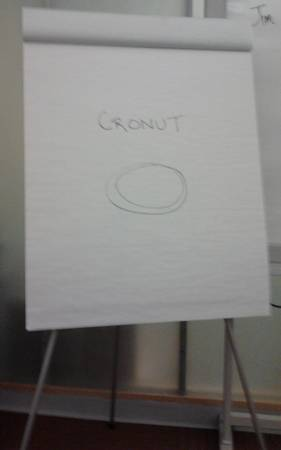 First off, no one needs explained to them contemporary art’s propensity towards failure. Which is to say most of us do need the little plastic cards hanging next to many works to explain why a particular piece belongs in, say, the Museum of Modern Art (MoMA) as opposed to the Museum of Bad Art.

The artist’s explanation for the Craigslist cronut priced at $200? “From a revered artist in the epicurean minimalist movement.”

To make a completely uneducated observation: It appears that, as general rule, after around 1950, those who couldn’t draw hands and faces instead shifted focus to honing their explanations of the work. And entry into the Museum of Modern Art required mastery of this latter mode.

Not to insist this drawing should hang in MoMA, but on those terms, it’s pretty good (postmodern?) commentary on the cronut craze. Recall that the pastry is a croissant-donut hybrid produced in, of all neighborhoods, SoHo, the once-bohemian outposts for beats and street performers that has become the most expensive neighborhood in New York City.

Given that people are willing to purchase a cronut for up to 600 percent of its market value, $200 doesn’t seem so unreasonable an asking price for the drawing.