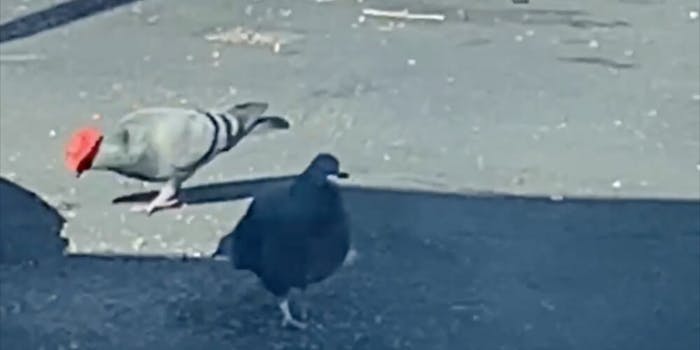 Who is putting cowboy hats on pigeons?

People are spotting pigeons with cowboy hats on in Las Vegas, Nevada–and they are documenting the encounters on social media.

The first post that surfaced online was created by a person named Bobby Lee, who on Thursday shared videos and photos of pigeons wearing cowboy hats.

“Just another day in the neighborhood,” Lee wrote on Facebook.

Just another day in the neighborhoodTo use this video in a commercial player or in broadcasts, please email licensing@storyful.com

Lee’s video shows a flock of at least four pigeons; two of them are wearing red hats. The hats are small enough to perfectly fit the pigeons and remain intact on their heads. Lots of questions were raised when the photos and videos went viral on Twitter.

Others began to document their own encounters with the cowboy pigeons.

Another account, which shares interesting, strange, and useful tidbits about the city, joked that  “there are consequences to legalizing marijuana.” Recreational use of marijuana became legal in 2017 in Nevada.

Someone is putting tiny cowboy hats on Vegas pigeons. There are consequences to legalizing marijuana. pic.twitter.com/CdK06gauYQ

“Yeah, I’m gonna take my pigeon to the old town road. I’m gonna fly ’til it can’t no more… I got the pigeons in the back. Pigeon coop is attached,” they wrote.

🎶 Yeah, I'm gonna take my pigeon to the old town road
I'm gonna fly 'til it can't no more…

I got the pigeons in the back
Pigeon coop is attached… 🎶

And / or shooting tequila

“I hope these hats aren’t glued to their heads,” Twitter user @AgentMonochrome wrote. “It is cute, but it isn’t safe for outdoor pigeons, the colors make them easier prey!”

That's really the question, isn't it? 😂

I hope these hats aren't glued to their heads. It's a new "trend" of dove releases (which are cruel, releasing domesticated birds into the wild unable to fend for themselves :c )

It is cute, but it isn't safe for outdoor pigeons, the colors make them easier prey!

In response to another concerned user, the Nevada Society for the Prevention of Cruelty to Animals (SPCA) tweeted that a local pigeon rescue group is looking for the pigeons with cowboy hats on to ensure their well-being.

Our understanding is that a local pigeon rescue group is currently looking for these birds.