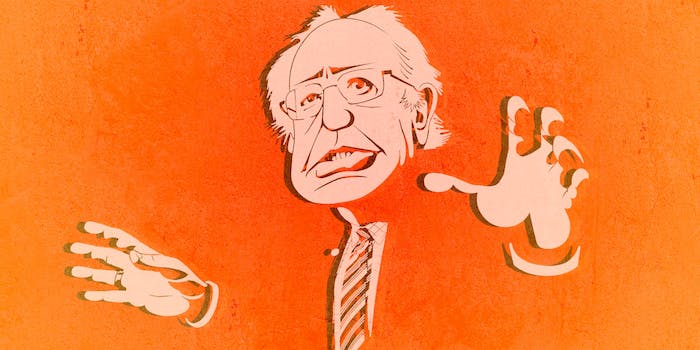 What is happening with those jabby hands?!

Here at the Daily Dot, we’ve been on Courtney Stodden Watch ever since she accused her mom of hitting on both her 55-year-old husband and the boyfriend she had at age 12. Stodden, once called “the world’s oldest 18-year-old,” lives in a diaspora of drama and intrigue that the rest of us can only pray to avoid for the entire duration of our short lives on this earth.

Stodden, now 21, first came to national prominence for marrying a man three decades years her senior while she was just a teen—but oh, how she’s managed to stay in the spotlight. Whether it’s family squabbles on Lifetime reality show The Mother/Daughter Experiment: Celebrity Edition or the release of a sex tape involving ice cream and “titty sprinkles,” the plasticine former child bride never fails to entertain.

But in the wee hours of Monday night, Stodden surpassed her own truly immaculate record of breathy, sexy, over-processed weirdness and gave to the American people something they did not know was lacking from their lives: an Instagram video of herself prancing half-naked around a guy wearing a Bernie Sanders mask while Jason Derulo’s “Talk Dirty to Me” plays. Stodden whines “Talk Bernie to me” while puffing her lips out even farther than their silicone would normally allow.

Is it an endorsement? Hard to tell, since Stodden looks remarkably unhappy throughout the lap dance. Her pout-n’-grind, robotically seductive though it may be, could actually contain an anti-Bernie message. Would Bernie be a good strip club customer? On the one hand, yes: He believes that wealth should be evenly distributed.

On the other hand, were he to jab frighteningly upward into the air as the man in the mask does in this video, we’re pretty sure no stripper would want to expose her vagina in his general vicinity.

And what of the prancing? Stodden’s high-knee steps, reminiscent of trotting show ponies in circus days of yore, seem to betray obstacles below. As she carefully lifts and replaces her tiny Barbie feet while slowly circling her prey—er, Bernie—it’s as if Stodden is struggling through the high grasses of the Midwestern plains (representing, perhaps, the middle classes that Bernie so desperately wants to revive). Or maybe she’s high-stepping to avoid land mines: a clear avocation of Bernie’s commitment to lowering the defense budget and relegating the U.S. military to “last resort” status.

We may never know exactly where Courtney Stodden stands on the 2016 presidential candidates—her wiles are carried aloft by a luxurious subtext—but we do know that she’s an American treasure.

Photo via US Senate (PD) | Remix via Max Fleishman