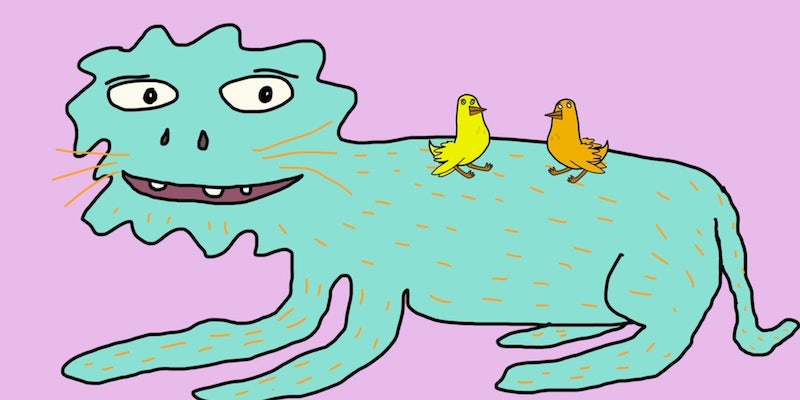 Meet the couple who turn their sleep-talking into surreal cartoons

Trying to make sense of a shared subconscious.

If you’re in a long-term relationship, you and your significant other certainly have something in common: You like riding your bikes together, seeking out fine dining, or even just the same kind of music.

But what if one of your shared interests was something you did while unconscious?

Nicole Ellsworth and Tyler Holtman, visual artists and an ostensibly normal couple by day, both tend to talk in their sleep—and it gave them a brilliant concept for a webseries: Sleep Talk Diaries.

It’s as simple as it is hilarious. They record everything they say overnight, then animate it, trying to account for every dreamy absurdity.

With endlessly amusing feeds on Instagram and Facebook, the Los Angeles-based pair boasts all the hallmarks of social media stardom. The Daily Dot caught up with Ellsworth (a freelance illustrator and graphic designer) and Holtman (an animator, filmmaker, and freelance video editor for the Daily Dot) to figure out how they translate their slumberous scripts for the waking world.

Daily Dot: When did you each discover that you talked in your sleep?

Ellsworth: I’m not sure when the first time was really, but it was around the time when I started having sleepovers as a kid. People often would tell me that I was either “chanting gibberish,” getting up and walking, or saying something absurd. Additionally, my family would often ask me what I was screaming about, and I would wake up with no memory of any of it. One time, my roommate told me that I got up at 3am and started asking about when our other friend would be coming over. She politely told me to go back to sleep, and I turned around and went back to bed.

Holtman: There were a few occasions where someone told me after a sleepover as a kid that I had been sleep talking. One memorable time, I was sleeping on a boat with a low ceiling, and my parents told me that I woke up yelling something in a strange voice, then hit my head on the ceiling. The next morning, I woke up not knowing why my head was hurting until my parents told me the story. Another time, my roommate told me I said, “Who left bird tracks in the ice cream?” Nicole and I have been living together for over two years, and I heard her sleep talk before we found a sound-activated app that would record our sleep talking.

What’s your process for recording and animating this stuff?

H: We started gathering recordings from an app called Sleep Talk Recorder in the summer of 2014. Nicole and I listen to our recordings and pick the most interesting clips. All of our 15-second weekly episodes are authentic uncut moments from a given night. We brainstorm ideas together, and create an animated concept to match the recording. I use a Wacom tablet to draw into Photoshop, then I animate in Adobe After Effects, and cut it all together in Final Cut Pro.

To what degree does it feel, when you play the sleep-talk back, like the two of you are having some kind of conversation? If one of you is awake and talks back, will the other reply in kind?

H: We have no memory of any of the recordings really. Sometimes Nicole wakes me up, and there are a few recordings where one of us is awake. However, we don’t usually use those recordings. When we hear recordings where we’re both talking at the same time, it does feel like a conversation, which is mind-boggling. I think we both encourage the sleep talker in the other.

E: We usually have no memory of the recordings, which makes hearing them feel like it’s coming from another person. When you realize it’s you, there’s a lot of cognitive dissonance. Sometimes I have trouble getting to sleep, and I will hear Tyler talking or clicking with his mouth, and I will try to ask him questions, but it usually ends up in confusion. However, there are moments we talk back and forth without any conscious memory.

As a sleep-talker myself, I sometimes worry about what what I’ll say while unconscious. What’s the most embarrassing thing you’ve said?

E: Nothing I’ve ever said in my sleep has ever seemed to relate at all to my life, so the recordings are less embarrassing and more surprising. There is one reoccurring noise I make that sounds like a frantic snorting pig when I’m scared and hallucinating. I always feel a little uncomfortable when I hear it. So don’t be afraid to get the app. If you’re a sleep-talker, it’s worth a few embarrassing moments, and you might be surprised at what you actually say in your sleep.

H: I wondered if anything embarrassing would come from my unconscious mind before downloading the app, but nothing I say in my sleep seems to have anything to do with my conscious life. Sometimes I let out some gigantic farts, but that’s not really embarrassing. Just a part of life.

Can you ever connect what you’ve said to the memory of an associated dream, or does it just seem totally random?

E: Most of the time, it’s totally random and completely unconnected to any dream that I can remember. Usually when I have very vivid dreams, I don’t sleep talk at all.

H: Yeah, it’s totally random. Nothing is ever said in my sleep talking that reflects my dreams, and my sleep talking never even causes me to remember an associated dream. It just comes through me, and it’s mostly just entertaining to hear.

Anything else you do in your sleep that most people don’t?

E: I have night terrors pretty often, along with intense visual hallucinations that have led me to get out of bed. I’ve seen bugs, animals, trains, and have woken up in bizarre positions and locations away from the bed after thinking something fell on me. One time, I woke up in a water heater closet.