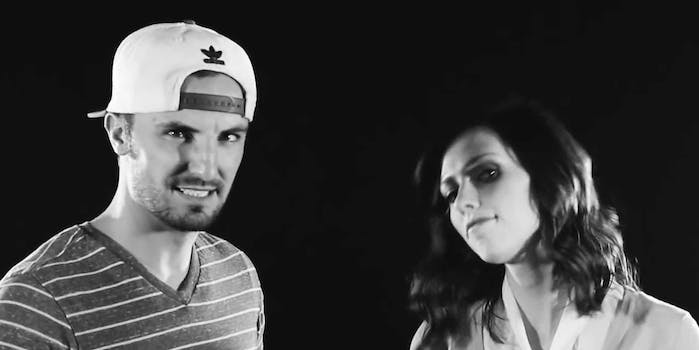 Not the most auspicious debut for this baby.

A young couple expecting a baby in May went out of their way to make the official announcement memorable by shooting “Taylor Baby,” a stylized hip-hop video about their impending parenthood.

“We have too much swag for just the two of us,” they wrote by way of explanation.

It’s about what you’d expect from a young couple opened inspired by a 2010 Toyota commercial. It’s awkward and forced in ways that call to mind Rebecca Black’s “Friday.”

Naturally, YouTube viewers went ballistic, with so many people mocking the performance or vilifying the pair for daring to rap at all that the comment section is littered with automatic deletions. “This video inspired me to call the hospital and schedule﻿ a vasectomy,” one user remarked. “Typical crackers﻿,” said another, amid a lot of testy chatter about race.

Others were quick to defend the concept, and at least one frustrated commenter appeared to know the couple personally—though he or she had no real qualms about blowing their privacy to smithereens with a comment about struggling with infertility.

The reactions may have been varied, but they all point toward one compelling piece of advice: When you’re going to have a baby, there’s no need to tell the whole world. Maybe try limiting your audience to people who might actually care. Or, at the very least, set the video to private.