Imagine going to the trouble of attending a friend’s wedding—travel, lodging, wardrobe, a significant investment of your limited time on this planet, and the requisite financial donation—only to later learn that the last part was somehow lacking. Now imagine you asked the Internet for advice.

If you can’t fathom this turn of events, no need: It actually happened. 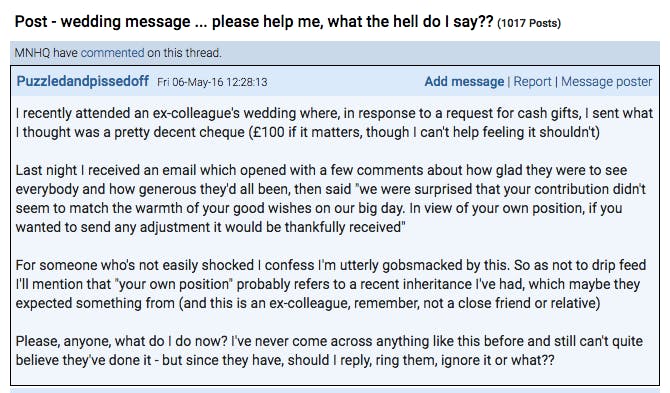 That’s a post from mumsnet, a U.K. message board devoted to all matter of domestic and professional subjects—and the fact that someone wrote this instead of putting a brick through the couple’s window should tell you something about the famous restraint of the British people.

Also, does it seem from the description that the recipient of this utterly repugnant email was just one of several people BCC’d on it? Savage.

Mumsnet users suggested canceling the check, sending a new check for 10 pence, posting the email on Facebook, and mailing the “cunts” a glitter bomb, but the unfortunate wedding guest took what was arguably the highest road by emailing back: “I assume this was some sort of mistake?”

Days later, she has yet to receive a reply. Considering that the Guardian picked up the story, we’d bet the newlyweds were shamed into silence.