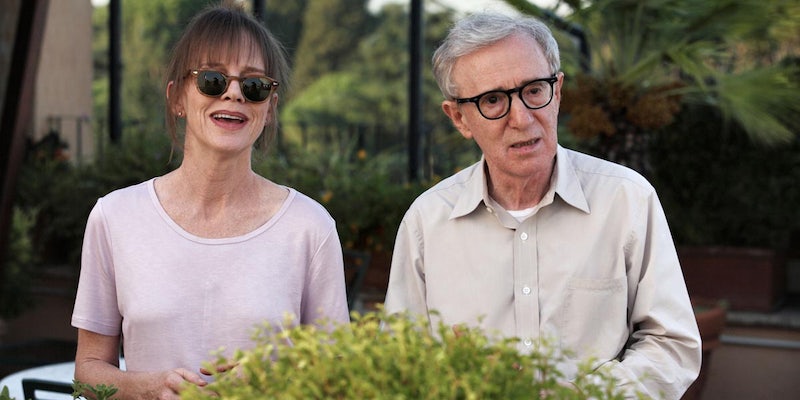 Even as the Internet reminds us of Allen's past, he's still industry royalty.

So far, 2015 is off to a great start for Woody Allen. Just last week, the leading cast was announced for a forthcoming, yet-to-be-titled Allen film: Jesse Eisenberg, Bruce Willis, and even Twilight star Kristen Stewart have all signed on. And in January, news broke that Amazon signed him to write and direct a forthcoming half-hour comedy series, available exclusively on Amazon Prime.

It sounds as though Hollywood continues to forgive him, even as discussion of his alleged abuse of adoptive daughter Dylan Farrow has reemerged within the past couple years thanks to the Internet. Indeed, there have been no major consequences on his career. Rather, as highlighted over at Bustle, there’s either the sentiment on the Web that he’s guilty or that he’s still awesome and prolific. The same could be said for Bill Cosby these days, but there’s striking differences in how two different men are treated by the same industry.

In the days and months since Dylan Farrow’s February 2014 open letter in the New York Times, which detailed her side of the story, Allen continues making film after film, maintaining a robust career that doesn’t show any sign of derailing anytime soon—even with industry knowledge of the allegations. Even further, as the Wrap reported, one of Allen’s longtime film distributors spoke out in his defense. Days after Farrow’s letter, a statement from Sony Pictures Classics said, “We have had a long, productive, and rewarding relationship with Mr. Allen. This is a very complicated situation and a tragedy for everyone involved. Mr. Allen has never been charged in relationship to any of this and, therefore, deserves our presumption of innocence.”

Even before coming forward in an open letter, Farrow’s account long predated the lifetime achievement award given in January 2014 at the Golden Globes. In light of that, some asked if the industry should really be honoring a man who allegedly molested his adoptive daughter—and if his career should still be held on such a high pedestal with that knowledge.

At the Guardian, Hadley Freeman noted at the time that he’s “legally innocent” and deserving of all the celebrations sent his way. “But seeing as he has never been interested in awards, it was hard not to feel that the Foreign Press Association might have done him a bigger favor by leaving him be and letting him quietly get on with his work and his life,” Freeman wrote. “It is totally OK to celebrate Woody Allen, but that doesn’t mean you have to.”

One year later, there’s buzz over yet Allen another film that may be a feather in his cap. Allen’s career still largely has industry support. He’s still being celebrated and sought after.

Cosby has still not been convicted of rape or sexual assault. Still, not one but more than two dozen women have come forward since last fall alleging he’d sexually assaulted and/or drugged them. Each allegation spans decades of his career. Those allegations were enough for TV Land to pull airings of The Cosby Show’s reruns. Netflix indefinitely postponed a comedy special, which Cosby’s rep characterized as a mutual decision, according to the Hollywood Reporter. And over at NBC, where Cosby’s hit show aired for eight seasons, the network put the brakes on a family comedy that he would’ve starred in. In each incident, there was no substantial comment from any of the three outlets—either in defense of Cosby or bemoaning the allegations.

The sheer volume and span of the allegations against Cosby is what’s most concerning to many who have followed the case. Still, when compared to the one major account against Allen, each example begs some difficult questions. How many sexual assault claims does it take for the public, let alone the industry, to seriously scrutinize alleged perpetrators, regardless of their level of status? And, even further, how much power and influence does it take for an alleged perpetrator to remain insulated from any negative impact on their career?

As both the Gloss and the Daily Beast have noted, Hollywood has a habit of forgiving men with violent or unsavory track records, mostly because they’re revered as entertainers. Within the worlds of television and film, that list includes Sean Penn, whose short marriage to Madonna had a history of domestic abuse, including an incident where the singer was beaten with a baseball bat. It also includes Roman Polanski, who was convicted in 1977 for raping a 13-year-old and fled the United States to avoid imprisonment—after which more than 100 filmmakers signed a petition for his release while being held by Swiss police for possible extradition in 2009. And during the 2002 Academy Awards, he won Best Director for The Pianist, in absentia, to a standing ovation.

There’s also Sean Connery, who has allegedly battered women, and in a 1987 interview with Barbara Walters, Connery argued that it’s OK if she’s being a “bitch.” (He went on to win the the Oscar for Best Supporting Actor in 1988.) Indeed, the list goes on.

Many of these actors and directors have something in common. Even with public knowledge of their behavior, including allegations, police records and convictions, they went on to garner both steady work and industry recognition. Many of them, including Allen, also happen to be both white and male, a segment of the population that has an overwhelming amount of institutional power and access in Hollywood. The vast majority of actors in major films are white men, as are the directors and studio executives working behind the camera. These are the people who disproportionately control television and film as we know it, and that reality doesn’t appear to be changing anytime soon. And that overrepresentation has a powerful impact on whose work gets embraced and who gets shunned.

Although Cosby’s work is legendary, there still seems to be more relative demand for Allen’s directing. His films, as well as the actors cast in them, have reeled in both tons at the box office and accolades come awards season. It’s not surprising, then, that many industry players continue supporting Allen—and other men like him—even with knowledge of alleged abuse. The multiple allegations against Cosby, on the other hand, coupled with arguably less industry influence and power, apparently makes it that much easier to cast him aside.

Without a doubt, men with proven track records or allegations of violence against women deserve strict scrutiny. And, with discernment, industry executives should decide against giving them such large platforms. The Cosby allegations are indeed horrific, and some decision makers clearly have had their say in how they’ll move forward in collaborating with him. But for now, it’s evident that this isn’t a course of action applied across the board. Whether it’s simply about money and power, or if race unwittingly factors into the equation, is a matter worth exploring.