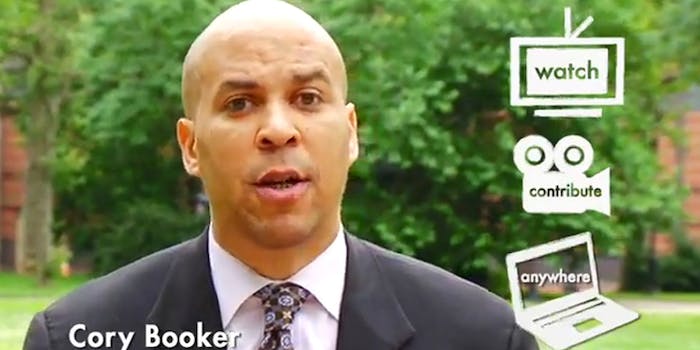 The Newark , NJ mayor—and Twitter personality—is launching a news and video site with backing from Oprah and Google's Eric Schmidt.

The Newark, NJ mayor announced Sunday the creation of #waywire, a news and video aggregation site aimed toward millennials. The site is currently in private beta and is expected to launch later this year.

Booker said the methods traditional media outlets, like CNN, are using to connect with millennials aren’t working and that the news networks need to be shaken up and diversified.

“I’ve always been very compelled about the democratizing force in social media that is getting more voices engaged in the larger dialogue,” Booker said told NJ.com. The site will be aimed toward millennials as a way “to let their own voices be heard, engage in a different way.”

Videos on the site will be a mix of syndicated, original, and user-submitted content. Topics to be discussed on the site, according to the site’s introduction video, include equality, economic, and global issues.

#Waywire has nearly $2 million in funding and is backed by an army of high-profile celebrities, such as Oprah Winfrey, Google’s Eric Schmidt, and Lady Gaga’s manager, Troy Carter. The site will hire 10 employees to curate videos.

It sounds a bit like Current’s mission during the television network’s first iteration, except that #waywire has a newsier focus. The online video aggregation field is crowded, but perhaps Booker’s appeal, along with other well-known names, could help break through it.