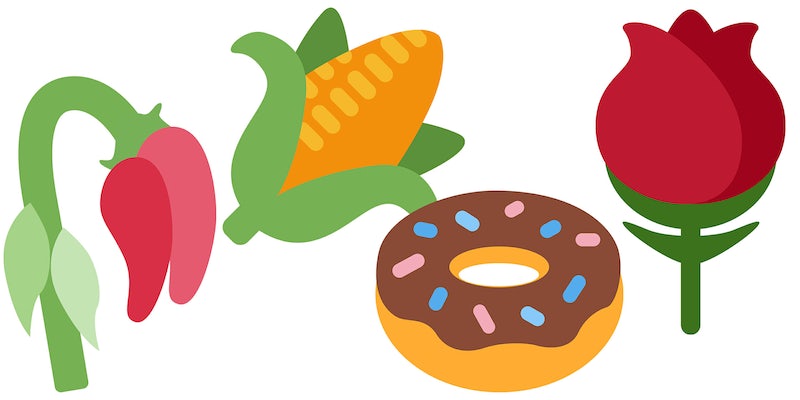 It all comes back to Hillary vs. Bernie, again.

If you’ve opened Twitter in the past month, you’ve probably noticed an influx of profiles with specific emoji next to the username. There’s a donut. There’s a rose. There’s a wilted flower. There’s an ear of corn (now known as “corncob”). What does it all mean? Because this is the internet, the explanations are both exhausting and confusing. You’ll question whether you want to continue using Twitter at all. The short answer? People are acting like the Democratic primary election of 2016 is ongoing, and Hillary Clinton and Bernie Sanders supporters are still at war with one another. But if you really want to understand liberal Twitter’s markers, here’s a short guide to the meaning behind each emoji.

A couple of weeks ago, a divisive Kamala Harris meme was being circulated on social media. The meme showed a photo of the California senator in front of a logo for “Centrist Corncobs 2020.” Some people criticized the use of term “corncob,” claiming that it was homophobic. But that theory was shot down by leftists on Twitter, who said that the inclusion of “corncob” was likely a reference to a popular dril tweet (if you’re lost, dril is a massively popular Weird Twitter account that parodies the internet). The meme seemed to be initiated by people who think that Harris, a Democrat, is too moderate on several issues to become a viable candidate for the 2020 presidential election.

Now people are using the emoji in their profiles as a joke. We think.

Donut (with or without water drop)

The donut emoji emerged from a comment made by Nina Turner, president of Our Revolution, the political action group that aims to continue the movement started by Bernie Sanders’ presidential campaign. On a recent trip to the Democratic National Committee’s Washington, D.C., headquarters, Turner and fellow Our Revolution supporters were apparently blocked from entering the building. The DNC also offered the group donuts and water—and the refreshments were not met with open arms. Turner said:

“They tried to seduce us with donuts and water. They’re pompous and arrogant enough to say to the people, ‘you’re not good enough to be on our property — and, oh by the way, we’re just gonna hand you donuts and water over the barricade.’ That is insulting. Absolutely insulting.”

Since last summer, when emails emerged showing that DNC officials favored Hillary Clinton over Bernie Sanders, the committee has been at odds with Sanders supporters. Turner’s comments showed that the feud between Sanders supporters and the DNC is not over.

Donut-emoji people are people who support the DNC and/or Hillary Clinton. (Or they might just really like donuts.) Some people are also using the water drop emoji to symbolize Turner’s comments about “donuts and water.” But the people who are using a donut emoji to protest Turner and everything she stands for are facing a lot of criticism.

it’s actually good that centrists are using the donut, a pastry with literally nothing in the middle, as their signifying emoji

The red rose emoji is no longer being used primarily by Bachelor/Bachelorette fans livetweeting the TV show. Sanders supporters began using the rose emoji several months ago. It’s colloquially known as the “Bernie or Bust” emoji. It’s also used to show support for the Democratic Socialists of America. Why a red rose? It’s a progressive symbol with roots in May Day marches.

People who fancy themselves "Democratic Socialists" a la Bernie use a rose emoji in their name. Political noobs mad BS didn't win.

It gets hard to tell on here how many are Bernie diehards vs bots, but I think at least 1/3 of my blocks = rose emoji crowd.

The wilted flower (or wilted rose) emoji holds the opposite meaning of the rose emoji. It’s for people who aren’t supportive of Sanders’ movement. Some of the same people who use the donut in their username also use the wilted flower.

The donut is sort of the new wilted flower emoji.

So, let’s review. Hillary Clinton and/or DNC supporters are using the donut and wilted flower emoji. Bernie Sanders supporters/Democratic Socialists use the red rose emoji. And the corncob emoji is being used by dril fans or people critical of so-called centrists. Corncob emoji people usually disagree with donut emoji people. Also, because it’s Twitter, anyone may be using any of these emoji to parody the meanings behind the emoji symbols. Phew!

Now you can understand all these emoji references on Twitter.

it's pretty rich that the rose and corncob emojis ppl are suddenly up in arms about a fucking donut emoji.