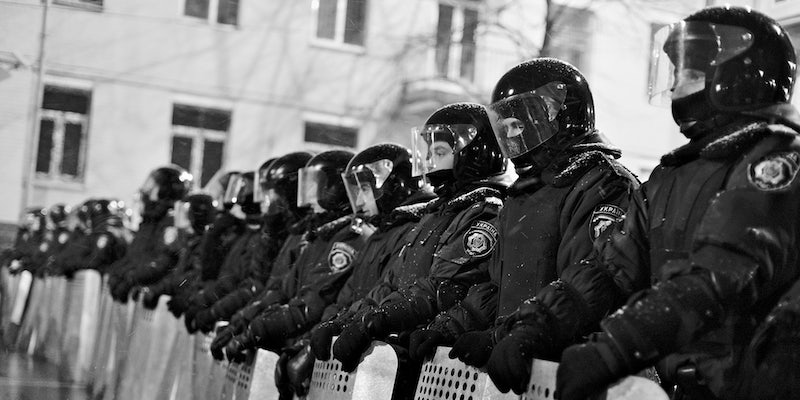 After the Ferguson shooting, it's time to take action.

Michael Brown was an innocent, unarmed young man who had just graduated from high school when he was gunned down by police in Ferguson, Missouri. In just a few moments, a police interaction ended his life and made him part of a statistic: One black man is killed every 28 hours by police or vigilantes in America. He joins a long list of black youth mercilessly murdered in the United States with little to no consequences, and members of the American public are angry. Not for the first time, the black community is taking to the streets to express its frustration, since society refuses to hear them in any other venue.

Would Brown, and others like him—Grant, Diallo, Grey, Martin, Russell—have been safer if police were compelled to wear body-mounted cameras? In New York City, where a black man died after being put in a police chokehold last month, public advocate Leticia James is demanding that police be outfitted with body-mounted cameras to increase the safety of the public. Police representatives claim that the cameras aren’t effective, but the facts beg to differ.

The case study for cop cams can be found in Rialto, Calif., where police were outfitted with body cameras and required to wear them in interactions with members of the public in 2012. What started as an experiment has turned into a compelling argument for requiring all police forces to use the technology: In the first year, use of force dropped by 60 percent. Public complaints against the police declined by 88 percent. Police Chief Tony Farrar views the experiment as a success, and the concrete evidence has made a useful starting point for discussion in communities across the nation.

One obvious consequence of wearing cop-cams is that police officers are more aware of their interactions with the public and are more cautious about what they say and how they handle people. This self-awareness is a far cry from historical police-civilian interactions, where police has often been high-handed because they operate under the assumption they are above the law. As seen in the poor conviction rate for police officers who gun down innocent people, beat them to death, or harass them, they have good reason to think they can abuse suspects without consequences.

Taking video has also helped with evidence-gathering, convictions in court, and moderating interactions from the civilian side, too. When people are aware that they’re on camera, they tend to be more circumspect—and with both cop and subject aware of the camera, it’s less likely that a situation will escalate. Cameras turn interactions from “she said, he said” to logged events—and the cop who claims to have reached for his Taser but grabbed his gun by accident no longer has an excuse.

In Washington, D.C., police were advised not just to use such cameras, but also to establish an advisory panel of people from marginalized groups, “including immigrants, non-English speakers, crime victims, and the LGBTQ population,” to review footage and make sure that police are behaving with integrity. As New York prepares to evaluate whether it should take up such cameras, it’s facing growing evidence from around the country, along with some support from some surprising sources, like the ACLU.

The ACLU’s stance on body-mounted cameras is complex. On the surface, they might seem like a violation of civil rights, involving taping of civilians in potentially vulnerable situations. Yet, the ACLU argues that the public good clearly outweighs the risks here, making body-mounted cameras an exception to its usual position against public surveillance. This is a form of surveillance, but it’s not necessarily unchecked surveillance on the public: It’s more about keeping a wary eye on the police.

Writing for the ACLU in a policy brief, Jay Stanley states: “Overall, we think they can be a win-win—but only if they are deployed within a framework of strong policies to ensure they protect the public without becoming yet another system for routine surveillance of the public, and maintain public confidence in the integrity of those privacy protections. Without such a framework, their accountability benefits would not exceed their privacy risks.”

The ACLU argues that recording must be continuous, that recordings themselves must be tightly controlled and destroyed after a set period of time if they don’t need to be held for evidence, that subjects must be notified, and that recordings should be made available to the public on request, but not if identifying information about the subject is revealed or the subject’s consent cannot be obtained. Such systems could be incredibly valuable with an oversight system, especially if it was handled by a third party with no vested interest in the outcome.

What would we see if Michael Brown’s as-yet-unnamed shooter had been wearing a body camera? We know what the eyewitnesses to his shooting saw—and we also know that they still haven’t been interviewed by police. This would seem to suggest that Ferguson’s ranks are closing around their own, in yet another example of the thin blue line made famous by Errol Morris’ film of the same name. Police forces classically go to extreme lengths to protect those in officer-involved shootings, to the detriment of justice for the victims.

The black community has had enough—and it’s had enough for a long time. The streets in Ferguson and St. Louis are erupting with a legitimate expression of frustration and rage, though it’s being characterized by the media as “rioting” and “looting.” Others view it very differently and ask why it is that the media are going to such lengths to vilify an oppressed and angry community. Kristen Lewis for Poynter notes that there’s nothing new about a complex racial history in Missouri in Ferguson and St. Louis alike, for eample, and that this is hardly a surprising outcome to police violence.

Natasha Lennard at Vice points out the problem with a media narrative that insists on promoting the idea that the black community is reacting out of proportion, or that a state of racial tension didn’t exist before.

“The predominantly young, predominantly black people of Ferguson who took to the streets and stores had ample cause to riot beyond one night of confrontation with militarized cops…the error lies in asserting that a peaceful situation existed in the first place. Sunday night’s rally may have begun calmly, but a context in which yet another young, unarmed black teen has been shot dead by police, and riot cops stand stationed to shutdown even a shadow of dissent, is not a context of peace. State violence prevails and sits heavily over Ferguson this week. Mourning residents have limited options: endure this savage status quo with quiet resignation, or, acknowledging that there is already a state of violence, they can fight back.”

Terry Jones, speaking to the Atlantic, impresses upon readers that this can happen anywhere: “Each municipality, and each area of St. Louis, should be looking at Ferguson and saying, ‘There but for the grace of God goeth us. It could have happened here.’”

Jesse Jackson says the time for “quiet” is over: “Many are observing Ferguson and witnessing the anger, demonstrations, looting and vandalism and calling for quiet. But quiet isn’t enough. The absence of noise isn’t the presence of justice—and we must demand justice in Ferguson and the other ‘Fergusons’ around America.”

The black community is no longer interested in keeping mum in the face of systemic police violence—and it never was, because the black community has been holding rallies and protest against the use of force for decades. Remember Rodney King? Remember Watts?

In the face of civil unrest that will not stop and convulsions of rage that show the residents of the city are done with quiet, those in power are moving quickly to suppress Ferguson’s residents, but also the media, cutting off the right to know, and a chance to see what’s happening first-hand. With the police being the only ones left standing to tell the story, they control the release of information and they think they can determine how people react to it.

Now, Ferguson has implemented a no-fly zone over the city, clearly targeting news helicopters. That sounds an awful lot like a city with something to hide and a city that thinks it can suppress the freedom of the press. Antonio French reported on Twitter that police were turning media away, while police fired tear gas and wooden bullets at protesters. (Police claimed they were using rubber, but wooden bullets were found on the streets and eye-witnesses reported being hit by them.) Like many cities, Ferguson also has a highly militarized police force—one so filled with heavy equipment that veterans say the police are rolling with more artillery than they did in war zones.

This does not sound peaceful. It sounds more like evidence of systemic discrimination and violence that cannot be resolved through platitudes, sensitivity training, or even court victories. Something concrete has to force police officers to behave with a higher standard of integrity and needs to be in place to remind them that someone is watching them.

The black community wants to hold police accountable for their crimes, and body cameras could become a valuable tool in the arsenal for doing just that. Would a police officer be so ready to harass a black youth if he knew it was caught on camera and that a committee would be reviewing the footage? Would a police officer pull a gun and shoot an unarmed man if he knew every move would be captured and dissected? Without the shelter of a defensive police force to hide behind, would police be forced to treat Black civilians like human beings, instead of, as Ferguson’s police chief put it, “animals?”