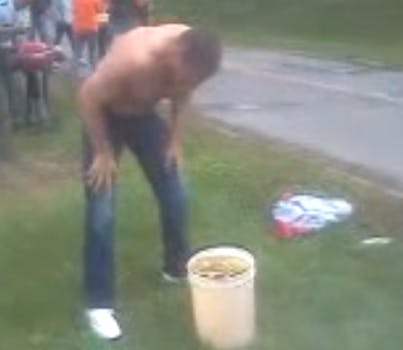 Cop sticks head in a bucket of urine—wins $450, loses pride

Officer Phil Croucher was suspended after footage of the event hit YouTube.

A policeman in Ohio has been suspended for two days after a video showing the 16-year veteran dunking his head into a 5-gallon bucket of urine surfaced on YouTube. His own head. In urine.

Phil Croucher is the daring soul who submerged his bare head into a bucket of liquid human waste outside of a Cleveland Browns game in October. The longtime Mentor, Ohio, policeman, who was off duty at the time, did the deed in part because of a $450 wager he’d made with nine of his buddies from the force, all of whom threw in $50 each and, we can only assume, contributed to the five-gallon drink.

But the big bet backfired when footage of the submersion ended up on YouTube, where it was subsequently seen by police chief Daniel Llewellyn, who did not take kindly to the stunt.

Llewellyn, who has described Croucher as “an exceptional” officer who’s warranted at least 14 documents that highlight his work, including some from the Secret Service and FBI, immediately put the officer on administrative leave for several days so that he could undergo a series of medical evaluations.

Croucher was reinstated after that, but news broke in northern Ohio’s The News-Herald Wednesday that Croucher would face a two-day suspension.

“You were identified as a Mentor Police Officer and that information was broadcast on many of the television, Internet, and news print media casting a negative light on the professionalism of not only yourself as a M.P.D. officer, but the entire organization,” Llewellyn wrote in an explanation of the suspension.

The nine other officers involved all received formal written warnings.

We can only hope that Croucher was allowed to keep the $450 his cohorts gave him for the submersion. After all, the Browns are 2-7 and sometimes look like the Little Giants pre-Lunchbox. They have no legitimate offensive strategy and are a bore to watch play football.

Put that way, a brief suspension, two ears full of urine, and a handful of cold hard cash doesn’t sound so bad.