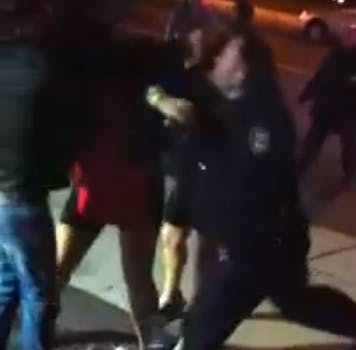 A YouTube video of a police officer attacking a woman at a nightclub has led to an internal investigation, Elizabeth, N.J., police say.

Police in New Jersey are investigating one their colleagues today after a cell phone video posted on YouTube showed that the cop punched a woman during a fracas that took place outside of an Elizabeth nightclub called Club Envy.

Neither the victim nor the policeman have been identified by local authorities, but Elizabeth, N.J. public information officer Kelly Vence confirmed to the Newark Star-Ledger that there was an internal probe going on. She declined to comment any further on the matter.

The officer appears towards the end of the 20-second video and pushes a pedestrian to the ground before locking arms with a woman in a red dress. Once there, the cop cocks back his right hand and delivers a pretty substantial jab to the head. The woman in the red dress goes down, and the video goes black—but not before a collective “ooooooh” is let out from the crowd.

The video has accumulated more than 10,000 views since it was posted on Elizabeth native Giovanna Diaz’s YouTube account Sunday.