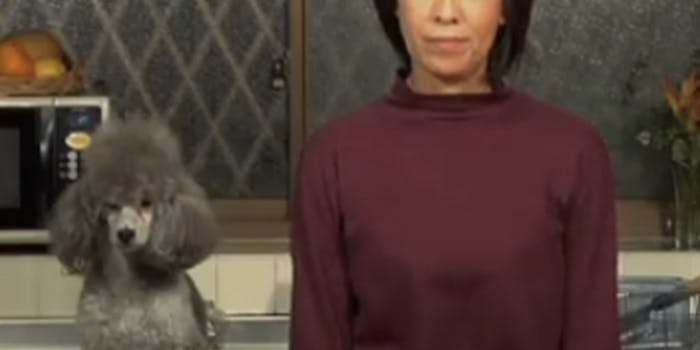 Chef from Cooking with Dog in ICU

Fans of Cooking with Dog flocked to YouTube to wish Chef well after she was injured in a bicycle accident.

Cooking with Dog is a cooking show on YouTube that features a poodle narrator named Francis and a quiet middle-age woman known as Chef. Their straightforward preparations of traditional Japanese cuisine have netted them more than 200,000 subscribers.

Though talkative Francis is the star of the YouTube Video Awards Japan-nominated show, viewers showed their support for Chef these past two weeks after the channel announced she was in the intensive care unit.

“On January 15th, Chef sustained serious injuries while riding her bicycle in the suburbs of Tokyo. She was rushed to the ICU by helicopter. I certainly understand your worries and concerns,” a spokesperson wrote as a bulletin.

The spokesperson said Chef was in stable condition but was unable to give any other information at the time.

In response, thousands of viewers left their regards. On a social network that is famous for its rude comments and trolls, these are surprisingly sweet, some referring to Chef as “Chef Okasan,” or “Chef Mom,” in English.

“Thank you for keeping us all posted on Chef. I have been truly inspired by chef’s videos, she truly is a﻿ food artist I send healing thoughts to her and wish her a speedy restful recovery,” commented Shaunie57 from Nottingham, United Kingdom.

Yesterday, the spokesperson wrote an update to thank viewers for their comments and to say Chef had transferred out of the ICU.

“Thank you very much for your kind words and prayers from around the world. Chef was transferred from ICU to the general ward at the end of January, but her recovery will take many months and include a long rehabilitation period,” he or she wrote.

It’s still uncertain when the show will begin releasing new videos. Until then, the channel has started publishing remastered videos of popular episodes like Yakibuta Ramen.