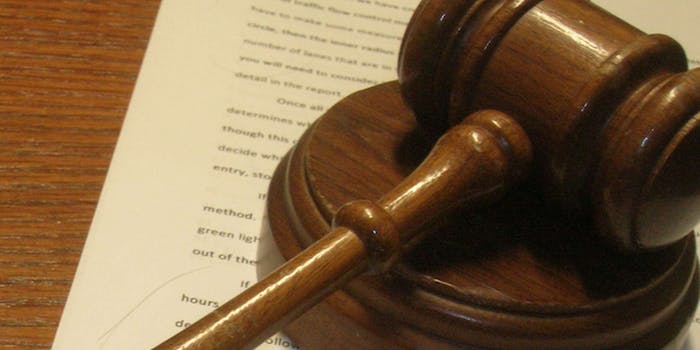 You can’t sue torrent users just for the hell of it, judge rules

The District Court of California has dismissed a copyright infringement case against some 3,000 BitTorrent users, ruling that “bare right to sue” is not grounds for litigation.

As reported by the torrent news site, TorrentFreak, Contra Piracy, a Switzerland-based nonprofit, attempted to sue 2,919 Internet users for sharing the 2011 movie “All Things Fall Apart” on BitTorrent.

In it’s initial complaint, Contra Piracy claimed that the defendants had “engaged in illegal conduct” by sharing the movie on BitTorrent. “The viral nature of transmission of files over [BitTorrent] results in the rapid and mass distribution of copyrighted media…irrespective of geographical borders,” the organization wrote.

As its name might suggest, Contra Piracy, founded in 2009, is not a film distribution or production company, the traditional plaintiffs in such cases. The nonprofit refers to itself as an “international association [of] technology service providers, law, firms, and intellectual property owners.” According to its complaint against the torrent users it is “charged by copyright owner members to enforce their copyrights.”

What does that mean exactly? Contra Piracy has obtained what it calls “enforcement rights” from Hannibal Pictures, the Hollywood production company that financed “All Things Fall Apart.” In that sense, Contra Piracy is attempting to become a copyright bountyhunter of sorts, going after torrent users pirating content in which it has no financial stake.

However, Contra Piracy didn’t know the defenders’ names. Instead, it knows only their IP addresses and the Internet service providers they used to download the movie.

In May, the judge rejected Contra’s request for more time to identify the defendants, further ordering the organization to prove the case shouldn’t be dismissed for lack of jurisdiction—in other words, to prove that it had any grounds to sue Internet users for downloading a movie it had no part in creating.

Ultimately, the judge wrote, Contra “does not explain what it means by ‘enforcement rights,’ but they appear to be nothing more than the ‘bare right to sue.’ “

“Courts should look not just at the labels parties use but also at the substance and effect of the contract,“ the judge wrote.

In late June, the judge dismissed the case.

In essence, the judge said you cannot sue someone for infringing the copyright of a work you didn’t help produce. In the eyes of the court, copyright enforcement is not a commodity that can be traded freely; it is a right of those who create and distribute original works.